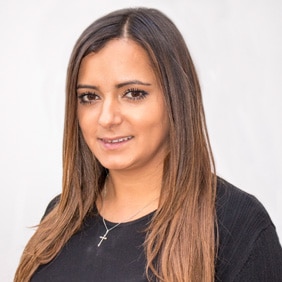 Rhea joined Hodge Jones & Allen, in December 2017, after training and qualifying at a niche specialist clinical negligence and personal injury practice in central London. She qualified as a solicitor in June 2017. Since then she has gained experience dealing with a variety of complex multi-track and catastrophic injury cases.

Rhea is also assisting with a multi-party product liability claim against ophthalmic retailers, Oculentis Bv, Oculentis GmbH and others relating to injury and loss caused by defective intraocular lenses. The claimants all had lens replacement surgery but their prosthetic lens has calcified due to contamination in the manufacturing process, resulting in the need for revision surgery or permanent loss of vision.

She has acted for individuals bringing claims in respect of allegedly negligent clinical treatment against NHS Hospital trusts, general practitioners, and private surgeons. Rhea has represented bereaved families at Inquests.

Outside of work she enjoys socialising with friends and family, travelling and occasionally visiting the gym.

When an individual has been injured as a result of a faulty product, it may possible to bring a claim for compensation against the manufacturer, suppliers, distributors or retailers of the product under the Consumer Protection Act 1987. Under this Act, a product is defective if the safety of the product is not such as persons generally are entitled to expect.

Can I use my helmet camera footage as evidence in my personal injury claim?

Despite all of the safety measures that have been put in place over the past 10 years, cyclists and motorcyclist...