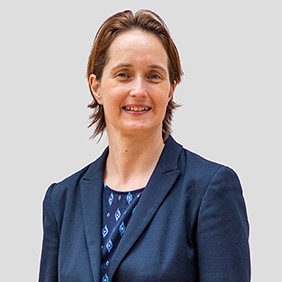 Lorna is a solicitor who has spent over 20 years securing compensation for victims and families affected by asbestos related diseases. She is passionate about the work she does and feels that anyone who has developed an asbestos related condition should have someone on their side to fight their corner.

Lorna started her career at Thompsons Solicitors as a legal secretary but quickly progressed to being a case handler. She started to specialise in handling asbestos cases in 1999. Lorna took the decision to gain her legal qualifications and attended university evening classes whilst working full time and she qualified as a solicitor in April 2006. The determination and dedication Lorna had to qualify as a solicitor is the same determination and dedication she has to get the very best outcome for her clients in the compensation claims she pursues for them.

Lorna worked at Thompsons Solicitors for 28 years and joined Hodge Jones & Allen Solicitors in January 2020. She can never see herself doing anything other than securing justice and compensation for the victims and families affected by asbestos related conditions – that is where her heart is and she obtains job satisfaction from knowing she has made a real difference to her clients by assisting them. Lorna feels privileged to do the legal work she does.

Lorna pursues claims for mesothelioma, lung cancer, asbestosis and pleural thickening. Those claims are often against the former employers of her clients (including when the former employers are no longer trading) and she has also pursued claims for women who have developed mesothelioma as a result of washing their husband’s work clothes. Lorna has acted for clients who carried out a wide variety of work including carpenters, plumbers, laggers, electricians, dock workers, office workers, firefighters, power station workers, train drivers and factory workers.

Lorna’s successful cases have been known to feature in national and local press and she has appeared live on the BBC to talk about asbestos matters. Lorna has written asbestos related articles for various Trade Union journals over many years.

Lorna’s experience in dealing with asbestos cases for so long means she knows what evidence is required to win a claim and she will give her clients clear and early advice. She is compassionate and sensitive in all dealings with her clients and is very approachable. Being given an asbestos related diagnosis is devastating for clients and Lorna strives to take the worry of pursuing a compensation claim away from her clients.

Many employers are still not complying with their legal duties to manage asbestos in the workplace and that means some people working today are still being exposed to asbestos. In addition to pursuing compensation claims, Lorna tries to raise awareness about this, to prevent future generations from having to receive an asbestos related diagnosis.

Over the years Lorna has worked with local support groups, most recently with LASAG (London Asbestos Support Awareness Group). The services offered by asbestos support groups are invaluable and Lorna is keen for people affected by asbestos diseases to know they are not alone in what they are going through.

Senior Litigator of the Association of Personal Injury Lawyers (APIL)

Lorna’s two daughters keep her very busy outside of work! She also likes to read whenever she can.

Trades that worked with asbestos materials – carpenters and joiners

Our asbestos team specialists have been dealing with asbestos disease claims for many decades and have a wealth of knowledge about how different workers were exposed to asbestos. We thought it would be useful and interesting to consider some particular trades that our asbestos team come across in their daily work. The first trade in this series is carpenters and joiners.

Asbestos is a killer; a stark statement perhaps, but one we can confidently make because our specialist lawyers witness every...

November is lung cancer awareness month. Lung cancer is a devastating disease which affects tens of thousands of people in the UK every year. November is the month when we focus on lung cancer and on encouraging people to seek medical assistance if they are displaying typical symptoms of lung cancer.