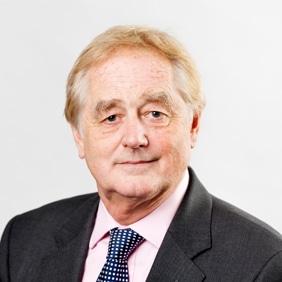 Patrick Allen qualified as a solicitor in 1977 when he founded Hodge Jones & Allen in Camden with Henry Hodge and Peter Jones. He was the first managing partner and became senior partner following Henry’s retirement in 1998.

The ethos of the firm is to help individuals assert and defend their rights and correct miscarriages of justice. Many of the first cases were funded by the legal aid scheme and legal aid still backs a substantial proportion of the firm’s criminal defence, care and housing cases. HJA now has 230 staff and operates from modern premises close to Euston station.

For the last 25 years, Patrick specialised in complex personal injury and multi-party cases. He was the leader of the HJA team that managed the Gulf War illness claims for UK veterans and the New Cross Fire inquest. He has also managed the MMR and Sheep Dip multi-party actions and played a lead role in the King’s Cross Fire and Marchioness Litigation on behalf of claimants. Patrick acted in many claims for compensation for miscarriage of justice cases against the Home Office.

He sat as a Deputy District Judge from 1998 to 2014. He acts as a Deputy for many brain injured clients.

Patrick writes and lectures on personal injury law, costs and management. He is a New Law Journal columnist.

Patrick is recognised in the Legal 500 and recommended as a ‘Senior Statesman’ in Chambers UK, A Client’s Guide to the Legal Profession 2017 – “He is fantastic. He has a lovely way with clients, is very nuanced in his approach and brings a lot of calm and authority to his cases.” In Chambers 2021 he is described as “Very experienced, pragmatic and approachable.” “Patrick is brilliant and has been a really great help to me.”

In 2018 Patrick founded the Progressive Economy Forum. The Forum brings together a Council of 20 eminent economists and academics to develop a new macroeconomic programme for the UK. It publishes research and policy proposals, runs a wide variety of events, and manages a blog featuring authoritative analysis from progressive economists and academics. Patrick is the Chair of the Council.

The Return of the State?

The COVID-19 pandemic has revealed the bankruptcy of austerity ideology, says Patrick Allen in his latest column for the New...

Labour Under Keir Starmer: Reasons To Be Cheerful?

#IWD2020 – Representation and Retention: How our practice’s progressive principles translate into our record on gender diversity

At Hodge Jones & Allen Solicitors, legal representation is for everyone. And we strive to deliver this commitment in its fullest sense, because we know that what is best for our clients is also best for our business.