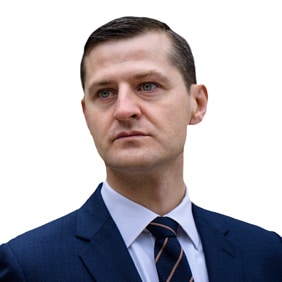 Edward joined the firm in 2009 as a qualified solicitor and has been a partner since 2016. He comes originally from North Wales and is a third generation solicitor, following in the footsteps of his late father, Mr Huw Elwyn Jones, and his late grandfather, Sir William Elwyn Edwards Jones.

Edward is a partner in the criminal defence team, specialising in serious crime, extradition and the management of personal data held by the police. He appears regularly as an advocate in the Magistrates’ court and the Crown Court and has a particular interest in representing clients with mental health issues who have committed serious offences such as attempted murder and wounding with intent. He is an experienced duty solicitor and Higher Rights Advocate, which means that he is able to represent clients in the highly specialised and high-pressure forum of the Crown Court. He is also a recognised specialist in extradition law and ranked as such in Chambers & Partners. He regularly appears as an advocate in extradition proceedings in the Westminster Magistrates’ court and regularly litigates extradition cases in the High Court. He has also appeared as advocate in the Court of Appeal (Criminal Division) in appeals against sentence and conviction and in the Administrative Court in appeals against extradition orders.

Edward is a trail-blazer in the burgeoning field of managing criminal records. The GDPR and Data Protection Act 2018 have exponentially increased people’s awareness of the circumstances in which organisations process their personal data. The police are able to collect and retain a huge amount of an individual’s personal data upon arrest and Edward is an expert at making applications to the police to have incorrect personal data amended or to have personal data that is held unlawfully to be deleted. In particular, Edward has developed a specialism in the complex task of applying to delete unlawfully administered police cautions from the Police National Computer. Edward is also a specialist in advising upon Disclosure & Barring Service certificates and applications to remove individuals from the Children’s & Adults’ Barred list. He is co-author of a leading book on the subject, Privacy, Criminal Records & The Criminal Justice System (Bloomsbury).

Listed as a “rising star” in Super Lawyers 2013, he is also a recommended extradition lawyer in Chambers & Partners UK 2019: “Sources speak highly of him as someone who is “very good at maintaining a rapport with clients as well as judges and other parties who may be involved in a case.” In Chambers 2021 Edward was described as “fantastic and extremely experienced, with an astute legal mind.”

Edward has acted in the following reported cases:

Edward has also acted in the following unreported cases:

Most criminal defence solicitors will have by now come to accept that the government is not their friend, and indeed no friend in general of the criminal justice system. Years of underfunding courts, prisons and legal aid have brought the system to the brink of collapse, a collapse that the Covid-19 pandemic has done much to accelerate (although the collapse was very much in train before the pandemic hit, and let no one fool you into thinking otherwise).

The government’s response to P, G & W: A welcome, if bare minimum, step

On 30th January 2019 the Supreme Court in the case of P, G & W V The Secretary of State for the Home Department [2019] UKSC 3 considered in detail the current regime for the disclosure of a person’s criminal record. It found the following aspects of the regime to be unlawful – (1) the “multiple offence” rule, which mandates that a person’s entire criminal conviction history will be disclosed on Standard and Enhanced DBS certificates if that person has more than one conviction recorded against them, for any offence and (2) the rule that included youth cautions, reprimands and warnings among matters that must be disclosed in certain circumstances

Suspects involved in criminal investigations currently have the right to privacy regarding personal information and details relating to the investigation...