It’s that time of the year again – the office Christmas party. A strange social and work event which can sometimes get out of hand with plenty of opportunities for people to forget that while it may be a party, you’re still technically at work and something you do at the party could then come back and haunt you later.

Here’s a list of suggestions to help you navigate the minefield:

Don’t drink too much 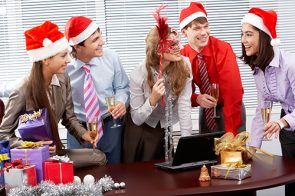 The office Christmas party is a time to let your hair down and relax after a, probably, tough 2018 but remember you are still at work. Your superiors will be at the party so you’re probably still being watched by them and the last thing you want to do is ruin a year of good work with drunken antics. So, be sensible, don’t over-indulge and definitely don’t let the alcohol give you the confidence to confront a colleague about something that has been annoying you for a while – the Christmas party is the worst time and place to do that! Don’t assume that anything you do at the Christmas party is exempt from a disciplinary sanction.

Stay away from office gossip

It’s always entertaining be up to date on all the office gossip but don’t spread gossip at the party. You never know who is listening and where the information will go. If you’ve been drinking and your inhibitions are lowered you may accidentally let something slip you didn’t intend to. Just relax and enjoy the party. Comments which cause upset to others can amount to bullying or harassment. Motivation is irrelevant. One person’s jokey banter could be another person’s harassment.

Whilst you may be attending a party, you are still at work so dress appropriately. This doesn’t mean that you can’t dress up, just use your judgment and wear something that you won’t be embarrassed about when you come into work following the party and see photos. The dress code may not apply but a common sense approach is best.

I will leave you with a cautionary tale involving bankers, drinking and licking

So, remember, although the office Christmas party takes place outside of your usual working hours, it is technically and in most cases still a work event and you are expected to behave in keeping with your employer’s usual standards of behaviour. If you’re involved in an incident at the party it’s likely to follow you to work the next day and cause problems.