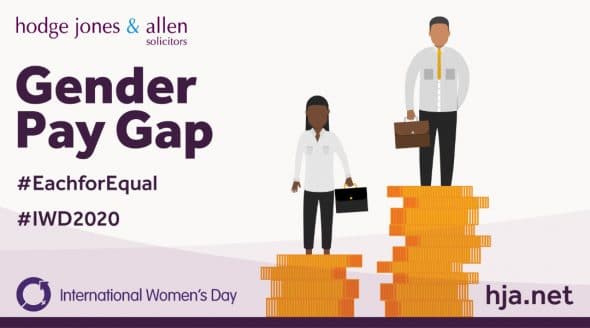 The 8th March 2020 is International Women’s Day, a global day which celebrates the social, economic, cultural and political achievements of women. Every year the initiative chooses a different theme to focus on. This year’s theme is equality, which provides a timely juncture to consider the recent developments in progress towards equal pay for women.

The Equal Pay Act 1970 (since repealed and replaced by the Equality Act 2010) introduced the principle that men and women should receive equal pay for equal work into UK domestic law. The Act provides that anyone employed under a personal contract to work, is entitled to contractual terms that are as favourable as those of a comparator in the “same employment” of the other gender.

The law achieves this by implying a “sex equality clause” into a woman’s contract of employment, which operates by replacing her less favourable term(s) with the equivalent more favourable term(s) of a man’s contract. This clause does not operate if the employer is able to show that the difference in contractual terms is due to a material factor which is neither directly nor indirectly sex discriminatory. An Employment Tribunal can accept equivalence or make a declaration of the claimant’s rights and require payment of any arrears of pay (going back 6 years) or damages for a breach of a non-pay term.

Recently, in the landmark case of Samira Ahmed v BBC, the Employment Tribunal unanimously found that Ahmed should be paid the same as her male counterpart, Jeremy Vine, for doing equal work. The BBC’s ungainly argument that, “Points of View” is an entertainment programme with a long history and is a household name with the public, [while] Newswatch… isn’t” was rejected by the tribunal who awarded Ahmed over £700,000 in compensation for the years’ that she was paid 1/6th of Vine’s equivalent salary. The Tribunal held that, following assessment of the intricacies of what Ahmed and Vine’s role as presenters entailed, that “the work that the Claimant [Ahmed] and Jeremy Vine did in presenting their respective programmes was the same or, if not the same, very similar.” This practical assessment as to the likeness of any two roles, looks directly to the skills and experience required. In this instance the Tribunal dismissed the BBC’s claim that Vine’s cheekiness and ability to have “a glint in his eye” warranted the difference in pay.

Ahmed’s case is not the first time that the BBC has been under fire for its failure to comply with equality legislation. In 2017, Theresa May wrote an open letter to the BBC criticising the corporation for “paying women less for doing the same job as the men.” Despite the introduction of mandatory gender pay gap reporting on companies with more than 250 staff in the same year, the issue of unequal pay appears to remain particularly prevalent amongst big corporations. There are on-going campaign initiatives for pay transparency in companies that are not required to report on their gender pay gap. Leading business women launched ‘#MeTooPay’ in October 2019, which urges signatories to back legislation which would give female employees the right to find out what male colleagues earn within their workplace, and impose fines for any failures to disclose the information.

At the beginning of February 2020, the Employment Tribunal heard another high-profile equal pay case involving the Telecom giant Talk Talk. The claim was brought by a former manager of Talk Talk’s cyber security team, Rebecca Burke, who claimed that, while she was made redundant from her post under the guise of economic efficiency, other programme Directors at the organisation earned salaries on average 40% higher than hers and received at least 50% more in bonuses. These other colleagues were doing equivalent roles and were all male. Burke used crowd-funding to fund the legal costs of her trial under the mandate of “ help[ing] [to] build a fairer future for our young women and girls by holding our UK businesses to account when they break the equal pay laws that women fought so hard for 50 years ago.” The Employment Tribunal is yet to release a written judgment on the case but following the BBC decision there’s a good chance Burke’s claim will be successful too.

As with the Ahmed’s case at the BBC, Burke’s predicament is unlikely to be an isolated incident. In 2018, Talk Talk’s gender pay report found that the organisation’s average gender pay gap was 14.6%. Meanwhile, it has already been reported that the BBC has been urged to settle all outstanding equal pay claims to avoid further damage to its reputation. Other sectors have opted for internal processes to make gender equality a priority. In 2019, TSB Bank imposed bonus docking on their leadership team for a failure to increase the proportion of women in senior roles to 45-55% by 2020.

In a more equitable world the importance of fair remuneration cannot be understated. The monetary amount assigned to something, rightly or wrongly, often coincides with the value apportioned to it. Therefore, it may be said that to pay men and women unequally for the same work subliminally (or overtly) creates a rhetoric that a man’s work is more valuable than a woman’s work – which is undesirable for obvious reasons. The hereditary inequality of wage-labour became entrenched following the industrial revolution. Now, as illustrated by the high-profile judgments described, in addition to the internal initiatives and gender pay gap reporting within organisations, the right of women to receive equivalent pay for the same work as their male counterparts is moving towards becoming an established practice. #EachforEqual