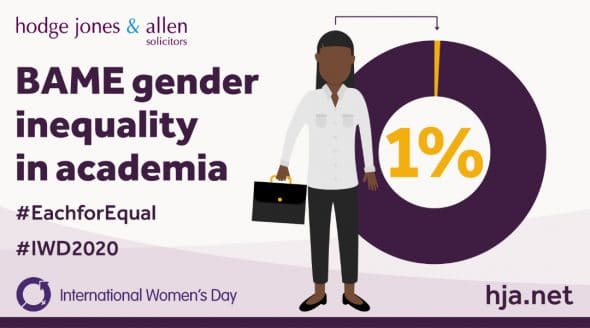 On International Women’s day we rightly reflect on the positive steps taken towards gender equality. However, it’s also a time to take stock and identify the work that still needs to be done. Creating a gender equal society requires us to address the challenges faced by all women, including women of colour.

In 2019 two reports were published which shed light on the considerable challenges faced by BAME women within British universities. The first, entitled Staying Power, by Dr Nicola Rollock, highlighted the problem of lack of diversity in UK universities – less than 1% of all professors were black and white academics are nearly two and a half times more likely to make professor than their black counterparts

The academics interviewed identified a number of challenges, including, bullying and racial harassment by colleagues, lack of transparency in promotion and universities unwillingness to recognise and address institutional racism.

Examples were given of BAME academics being overlooked for promotion and often mistaken for clerical staff.

The Equality and Human Rights Commission’s report, Tacking Racial Harassment: Universities challenged (published in October 2019) revealed that racial harassment was a ‘common occurrence’ in British universities. It also demonstrated that there was significant underreporting of racist incidents and that universities were failing to appreciate the scale of the problem.

When acting for academics, we frequently encounter cases where BAME women are underpaid, repeatedly overlooked for promotion, less likely to be given permanent roles compared to less qualified, less experienced white academics.

Women of colour have to contend with the double penalty of gender and race. However, many are reluctant to speak out. This is due to a number of factors, including a lack of confidence in the institutions willingness to deal with the complaint properly or at all and a fear that they will be perceived as troublemakers.

Whilst the Equality Act 2010 prohibits discrimination on grounds of both race and gender, the burden falls on the employee to take action to enforce their rights. Publicly funded universities are also subject to the public sector equality duty. This requires universities to have ‘due regard’ to the need to eliminate discrimination and advance equality of opportunity.

Whilst most universities have copious policies on equal opportunities, often, little is done to effectively enforce them.

Universities need to do more to recruit and promote BAME women. The recruitment as well as promotion process needs to be reviewed and in most cases overhauled to ensure genuine equality of opportunity. Ensuring diversity throughout the process – from shortlisting to final interview – should be the norm. And training on unconscious bias should be mandatory, particularly for those involved in recruitment and promotion.

At the outset of the promotion process, I would encourage academics ask questions and seek changes to ensure diversity in the process and remind the institution of its public sector equality duty.

Where an academic believes she has been passed over for promotion, she can use the question and answer process to obtain information concerning the selection process. Including, details of the gender and race of the decision makers, as well as of the other candidates, and details of the candidates experience and skillset. Ask how many BAME candidates were shortlisted and interviewed. Ask the university to identify the steps taken to comply with its obligation to ensure equality of opportunity. It is advisable to request written feedback. The information gathered through the question and answer procedure can be used to hold the institution to account, help determine whether discrimination has occurred. If so, it may prove useful as part of any legal claim.