I’ve suffered sexual harassment. What can I do? 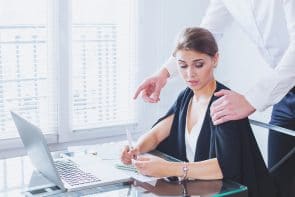 ‘More than 1,000 reports of sexual abuse and harassment at UK McDonald’s’
‘One in 12 NHS staff sexually harassed at work’
‘Bullying and sexual harassment of MPs’ staff ‘widespread’ in Parliament’

These are all headlines from the last few months – you don’t have to look far to find stories and statistics about sexual harassment at work in the news.
Clearly it is a widespread issue – but how does the law protect employees from sexual harassment? And what should you do if you are sexually harassed at work?

What is sexual harassment?

The legal definition of sexual harassment is:

Unwanted conduct of a sexual nature which

‘Unwanted conduct’ is not defined in legislation, but some examples are: sexual comments or jokes, physical actions, sending explicit emails or displaying pornographic images. The conduct may be one off, or a course of conduct over a longer period of time.

Whether the second part of the definition is satisfied depends on:

It is the way that the conduct makes you feel that is important, not whether the perpetrator intended to harass you.

What can I do?

It can be intimidating to address sexual harassment in the workplace, perhaps even more so if the perpetrator is somebody in a senior position. Knowing how to address harassment and what legal rights you have is therefore key.

If you’ve been sexually harassed at work you could make a written complaint as per your employer’s sexual harassment policy or raise a grievance. If your complaint is not upheld, you may decide to appeal it internally and then seek a resolution through ACAS early conciliation. If that fails, you have the right to pursue your claim in the Employment Tribunal.

It is important that you collect evidence of what’s happening. For example, you could write diary entries about any incidents that occur; speak to colleagues you trust who have witnessed the behaviour; retain copies of any offensive emails/texts/social media posts.

Who can make a claim?

You can make a claim whether you are already employed, or the harassment occurred when you were applying for a job.
It’s also important to note that the conduct does not need to have been directed at you. For example, you may be able to bring a claim of sexual harassment if your line manager made a sexual joke about a colleague of yours which made you uncomfortable.

Who can you claim against and when?

You can bring a claim against the colleague who harassed you and also against your employer, who may be liable.

The deadline for commencing legal action is 3 months less 1 day from the incident of harassment.

What can I expect if I’m successful?

The most common remedy for sexual harassment claims is monetary compensation – for any financial loss you have suffered and to compensate you for how the treatment has affected you.

Making a complaint about sexual harassment at work can be a daunting process, so it is important that you understand your rights and how the law can protect you. It may also provide some comfort to note that the law also protects you if you have been dismissed by your employer, or made to suffer another detriment, as a result of pursuing a sexual harassment claim.