The Edward Colston statue: could the protesters be prosecuted and is there a defence? 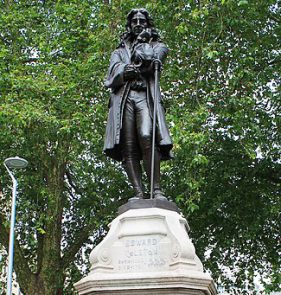 This weekend saw Black Lives Matter1 protests held across the UK. On Sunday morning, protesters in Bristol tore down a 5.5 metre (18ft) bronze statue2 of slave-trader Edward Colston3 and threw it in to Bristol harbour.

The protesters used ropes to topple the statue over. Soon after, a protester was pictured with his knee on the figure’s neck; reminiscent of the horrific killing of George Floyd4 by a Minnesota police officer. The statue was then dragged through Bristol and thrown into the harbour – mirroring the estimated 19,000 African slaves5 who died and were thrown overboard during Middle Passage crossings that Edward Colston personally oversaw.

These dramatic and symbolic acts have had a mixed reception. Historian David Olusoga stated6 that the toppling was ‘not an attack on history. It is history.’ On the other hand Home Secretary Priti Patel called the actions ‘utterly disgraceful’7.

Avon and Somerset Police have stated8 there will be an investigation into the ‘act of criminal damage’.

What is criminal damage?

The prosecution will need to prove each element of the offence. But bringing a prosecution may not be as straightforward as it sounds.

In line with the Code for Crown Prosecutors10, any prosecution must be in the public interest. Despite the Home Secretary’s announcements in the House of Commons on 8 June that the protesters ‘will be prosecuted’, it must be remembered that she has no authority in this area. That is a matter for the Crown Prosecution Service (CPS), who should consider carefully whether it is really in the public interest for this act of civil disobedience to be prosecuted.

What are the possible defences?

Every case depends on its own facts, in particular defendants’ beliefs at the time of the action. But experience tells us that campaigners often want to explain their reasons for taking action, and find the following legal principles are of more interest to them than the basic ingredients of the offence.

One of the main defences in protest cases involving criminal damage charges is that the defendant had a ‘lawful excuse’.

It is worth noting that the Edward Colston statue had been a source of controversy11 in Bristol for a number of years. Bristol’s first elected Mayor, George Ferguson, stated12 on Twitter in 2013 that “Celebrations for Colston are perverse, not something I shall be taking part in!” and there had been public calls for the statue’s removal. There had also been attempts by Bristol City Council to produce a plaque that added more information about Colston’s involvement in the slave trade. However the final wording could not be agreed and the plaque was never installed.

Given this long-standing local controversy, as well as the wider national context of George Floyd’s death prompting a widespread re-examination of racism in Britain, the local protesters may have believed that in all the circumstances, they would have public support for this action and indeed the support of Bristol City Council (who it would appear have responsibility for the statute).

If the protesters honestly believed that Bristol City Council would consent to the removal of the statue then, from the Criminal Damage Act itself, it is ‘immaterial whether a belief is justified or not if it is honestly held’.

This defence may be given further weight by the fact that the police decided not to intervene when the crowd began to topple the statue. Explaining this decision to the media13, Superintendent Andy Bennett, Bristol Police Commander, said the statue was:

‘a historical figure that has caused the black community quite a lot of angst over the last couple of years, so whilst I am disappointed that people would damage one of our statues, I do understand why it’s happened’ and that the force ‘decided the safest thing to do in terms of our policing tactics was to allow it to take place.’

There is also the possibility that reading the Criminal Damage Act with Articles 10 and 11 of the European Convention of Human Rights (ECHR), which are implemented in this country under the Human Rights Act 1998 (HRA 1998), could provide the protesters with a defence.

The recent case of DPP v Ziegler & Ors [2019] EWHC 7114 (Admin) looked at defences founded on the right to protest protected under Articles 10 and 11 ECHR.

In Ziegler the court decided that in circumstances where the criminalisation of direct action would result in a breach of Articles 10 or 11, a person will by definition have a ‘lawful excuse’ for the purposes of s.137 Highways Act 1980.

This principle could similarly be applied to protest cases involving damage to property under the Criminal Damage Act. It could therefore be argued that the ‘lawful excuse’ referred to in s.1 of the Criminal Damage Act does not criminalise damage which is reasonable in the circumstances, and that when assessing whether the damage is reasonable, regard must be had to the protesters’ rights under Articles 10 and 11. It would then be for the prosecution to prove that the protesters’ actions were not a reasonable act of freedom of conscience/expression protected under Articles 10 and 11 ECHR.

Was the statue itself illegal?

There is also an interesting possibility that the statue itself may have been considered to breach the criminal law. Section 5(1)(b) of the Public Order Act 198615 states that a person is guilty of an offence if she or he:

“distributes or displays to another person any writing, sign or other visible representation which is threatening or abusive, within the hearing or sight of a person likely to be caused harassment, alarm or distress thereby.”

Given the significant changes in attitudes towards slavery and race since the statue was erected in 1895, as well as the deeply distressing and personal history it invokes for many members of the black community, it could be argued that the statue itself is a visible representation that is likely to cause members of the black community alarm or distress.

Thus it could potentially be argued that the protesters used reasonable force by removing the statue from its plinth, in order to prevent the statue continuing to breach the Public Order Act.

If the value of the statue was less than £5,000 then this case could only be tried in the Magistrates’ Court. This means there would be no jury and a Magistrate Judge would decide the verdict.

If the value of the statue was more than £5,000 then the case could be tried in the Crown Court, with a jury deciding the verdict.

This leaves interesting tactical questions. One might expect the CPS to argue the statue is worth more than £5,000 as that would make the offence more serious and any potential sentences longer. However, due to the high profile nature of this case and the significant amount of public support the protesters have, the CPS may try to argue the statue is worth less than £5,000 so that the case is decided without the involvement of a jury.

What are the possible sentences?

A key factor is that offences committed in the context of “public disorder” (or, at least, what the sentencing court perceives to be “public disorder”) often attract prison sentences. For example, following the 2011 London riots, the vast majority of people who were convicted of committing criminal damage offences were given custodial sentences.

However, offences committed during protests (rather than simply public disorder) can be treated more leniently than the same offences committed outside of that context, pursuant to a key Court of Appeal judgment in the case of Roberts, Blevins & Loizou v R17 [2018] EWCA Crim 2739. It remains to be seen how a court would view the context of the statue’s removal, although there is in our view very strong argument that this was a protest rather than public disorder.

What can I do if I have been arrested or charged for an offence to do with this incident?

If you find yourself arrested or charged with anything to do with this incident, or a similar incident, please call Hodge Jones & Allen Solicitors on 0808 274 8226. Lines are open 24/7.