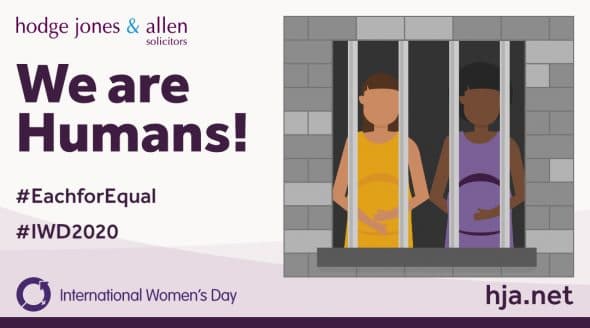 International Women’s Day is a day to reflect on the continued progress that is being made in the arena of women’s rights, as well as the areas where advancements are yet to be made. This year, my thoughts and focus will be on the approximately 3,831 women who are in prison across England and Wales.

The distress felt by women as a result of being imprisoned is often exacerbated by the fact that, for many of those who are mothers, their children are taken into local authority care when they enter custody. Only 9% of children whose mothers are in prison are cared for by their fathers in their mothers’ absence, and one fifth of women prisoners are lone parents before imprisonment. As there are only 12 women’s prisons across England and Wales, many prisoners are held far from their children and it is extremely difficult for them to maintain contact with them while they are in custody. The stress and anxiety that mothers feel about their children being taken into care or being unable to visit them can have a devastating impact on their mental health.

Pregnant women who are imprisoned face particular difficulties while in custody. It appears that the healthcare that pregnant women frequently receive in prison is not equivalent to that provided to expectant mothers in the community. In September 2019 at HMP Bronzefield, a new born baby died after her mother gave birth alone in her cell at night. This case raises serious questions about how the woman was left unsupervised and without medical care while she was in labour and giving birth. Every year roughly 600 pregnant women are held in prisons in England and Wales, and 100 babies are born there.

Over the past two years at HMP Bronzefield, on at least four occasions, women have given birth in distressing and potentially unsafe circumstances, including one woman who gave birth in her cell and another who was left in labour at night time, supported only by another pregnant prisoner. In December 2017, one woman suffered a stillbirth and another baby was admitted to neonatal intensive care. In these cases, both women were transferred from the prison to hospital at a late stage of labour. In March 2019, a woman gave birth in her cell with no midwife or doctor present.

Drug and alcohol abuse has a significant impact on women entering prison. 48% of women have committed an offence in order to support the drug use of someone else. 39% of women have reported having a problem with drugs and 24% with alcohol upon their arrival into prison. To me, it is devastating that so many women are in prison when they should be receiving therapeutic intervention for the drug and alcohol abuse that lies at the root of their offending. And it is even more upsetting to see that women are serving custodial sentences for acts committed to support the drug use of someone else, often a partner.

Over 60% of women in contact with the criminal justice system have experienced domestic abuse. 53% women in prison report having experienced emotional, physical or sexual abuse during childhood, and 31% were in local authority care at some point during their childhood.

Though women make up only 5% of the prison population, they accounted for 19% of all self-harm incidents in the year to March 2019. Women in prison are seven times more likely to have attempted suicide at some point in their lifetime than the general population.

It is clear that much of the female prison population is extremely vulnerable. These women need our support and care. In cases of non-violent offenders, prison should be a last resort, particularly if a prisoner is pregnant or her custodial sentence will result in her children being taken into local authority care.

The United Kingdom began privatising prisons in 1992. I strongly believe that the privatisation of prisons has been a serious mistake. It should not be the responsibility of private, for-profit companies to deprive human beings of their liberty. The loss of freedom in a free society is the highest punishment that this country offers. It should be administered by agents of the state and not by private companies. As a society, we would baulk at the idea of private police officers or judges having involvement in the criminal justice system, and yet we find ourselves with privatised prisons.

2019 saw serious concerns come to the fore regarding the safety and wellbeing of women in two privately run prisons. Currently, two women’s prisons are privatised. Both HMP Bronzefield (Europe’s largest female prison) and HMP Peterborough are run by a company called “Sodexo”.

In 2017, Annabella Landsberg died at HMP Peterborough. In 2019, jurors at the Inquest reviewing her case found that a series of failings contributed to her death. These failings were on the part of the prison, healthcare staff, GPs and custody officers. Four women have died at HMP Bronzefield since July 2016. As mentioned above, in 2019 it became apparent that there were serious concerns regarding the care of pregnant women at HMP Bronzefield.

In spite of this, it appears that Sodexo has not incurred contractual penalties relating to the levels of care to pregnant women in custody in the past three years.

It is clear that the female prison population is extremely vulnerable. I query strongly whether many of the women who have committed non-violent offences should actually be in the prison system, given the devastating impact that their being in custody can have on their lives and those of their children.

When women are imprisoned, it is my strong view that their deprivation of liberty should not be for the profit of private companies. This view is enhanced by the fact that there are clear concerns about the ability of Sodexo to properly care for the vulnerable population of the women’s prisons that it is running.