A vulnerable inmate hanged himself in his cell after a catalogue of failings by the prison authorities, an inquest heard. 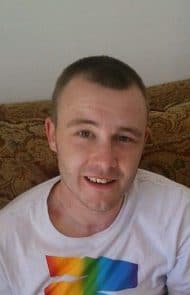 Ollie Pascoe, 22, committed suicide at Dartmoor Prison in March 2015 after prison authorities placed him on a wing rife with bullying intimidation, despite him sufferingfrom mental health problems.

Ollie, from Newquay, Cornwall, had previously been imprisoned at Exeter in 2013 where he awoke to find that his cellmate had killed himself. He was deeply affected by this incident and was diagnosed with PTSD and put on anti-depressants.

Despite this, and Ollie reporting flashbacks of the incident to prison authorities when he was jailed again in 2014, this information was not passed onto officers when he was transferred to Dartmoor. The inquest ruled that communication was ‘inadequate’ and this may have contributed to his death as prison staff did not have important information about Ollie’s mental health to allow them to carry out an effective risk assessment.

New prisoners at Dartmoor were supposed to be placed on G2 wing, which had more supervision and support, but instead Ollie, who was serving a sentence for a theft offence, was place on G5 wing where there was a known problem with bullying. The inquest heard evidence from other prisoners that drug use, bullying and intimidation was rife on the wing.

The inquest found that supervision on wing was inadequate and his enabled prisoners to ‘take advantage of the reduced supervision to the detriment of other prisoners’.

This was to Ollie’s ‘detriment’ and that if Home Office guidance had been followed ‘he would not have been placed on G5’.

The inquest, sitting between November 5 and 15 before Mrs Brown, Assistant Coroner for Exeter and a jury, heard that Ollie was ‘easily manipulated and eager for more friends which made him vulnerable to bullying’.

On being transferred to Dartmoor Ollie soon stopped collecting his medication but this was not followed up by prison healthcare staff. The inquest heard that monitoring of the collection of prescribed drugs was ‘inadequate’, but it was ‘unclear’ if this contributed to his death.

Dartmoor had a serious drug problem but officers were not aware that Ollie had begun to use drugs in prison.

There is barely any official record of Ollie’s activities or demeanour between his arrival at the prison and his death. During the inquest, prison staff who gave evidence had little knowledge of Ollie and most had never met him. There were no intelligence records to suggest that he had been the victim of violence, been using drugs or having any other disciplinary issues.

However, evidence from Ollie’s family, other prisoners and his recorded communications with people outside the prison suggest that Ollie had begun to use drugs heavily and was being bullied and threatened by older more experienced prisoners. This had begun to negatively affect his state of mind and health, causing him to lose a significant amount of weight.

The inquest found that Ollie was found “alone in a cell suspended by the neck with a ligature tied to a window bar” and recorded a verdict of suicide.

Ollie’s family were represented at the inquest by Cormac McDonough of Hodge Jones & Allen and Stephen Simblet of Garden Court Chambers.

Cormac McDonough, a specialist civil liberties lawyer from Hodge Jones & Allen, said: “The fact that there is minimal official record of Ollie during his time at HMP Dartmoor is telling of the systemic inadequacies at the prison during Ollie’s time there.

“Despite Ollie’s prison and medical records from HMP Exeter clearly recording his treatment for post-traumatic stress disorder, nobody at HMP Dartmoor identified Ollie as being a vulnerable prisoner in need of support. This is a clear failure in communication within the prison system and by prison and medical staff in their assessment of Ollie’s risk.

“This was compounded by the inexplicable decision to place Ollie on the 5th floor of G-Wing where he had next to no supervision, where he quickly became a victim of bullying and intimidation and succumbed to the prison’s problematic drug culture: all issues which the prison failed to adequately deal with and which the evidence suggested may have contributed to Ollie’s death. I hope that the prison will act on the jury’s criticisms by urgently reviewing their systems to ensure that vulnerable prisoners like Ollie receive the support they need and avoid further tragedies like Ollie’s death.”

Ollie’s younger sister, on behalf of her family, said: “Our family is filled with sadness at the loss of Ollie. We have waited three difficult years for this inquest to take place. It has given us some closure on the circumstances of Ollie’s death and an insight to the drug culture, bullying and pressure that Ollie was subjected to during his short spell inside HMP Dartmoor. We hope that the findings of this inquest put pressure on HMP Dartmoor to take steps to safeguard their inmates so that nobody has to go through the pain that we have suffered. Ollie was an upbeat young man who brought love and laughter into the lives of everybody that he encountered. He will be in our hearts forever.”