What is considered legally homeless?

Published on 12th April 2018, the annual Homeless Monitor considers homelessness across England. It also takes note of how the Homelessness Reduction Act 2017 (in force from 3rd April 2018) has been respected for emphasising the need for more support for single people and the need for further homelessness prevention measures.

The new legislation introduces numerous changes to the previous legislation, one being that it opens the doors for assistance to be offered to those who are threatened with homelessness. This category of people will have been served with a valid notice of possession or termination of their tenancy for the only property they have available to them and such notice must expire within 56 days.

Therefore, the aim of this section of the new legislation is to allow such a qualified person to be considered as a homeless applicant, where previously they would have been turned away and by the local authority and advised to make a homelessness application only after the issue of court proceedings, and usually only after receiving an eviction date from the bailiff1. Therefore, the new approach demonstrates a more proactive approach rather than waiting for the inevitable and leaving the homeless applicant in limbo in the meantime.

Further key changes in the legislation focus on:

However, as housing lawyer Farzana Chowdhury has stated in a previous press release, this and the aims laid out in the 2017 Act may be unachievable in the long term without proper funding in place to implement these measures.

Every local authority is under a statutory duty to provide free advice and assistance with regard to homelessness. If an individual who falls within the definition of being homeless is eligible, is in priority need and is not intentionally homeless, then a main homeless duty is owed by the local authority in question and suitable, long-term accommodation must be provided.

However, the Monitor highlights that those residing in temporary accommodation pending a long-term offer of accommodation reached 78,000 at the end of March 2017, and it is predicted that if this figure continues to rise at the same rate, it will reach 100,000 by 20202.

With the annual Homeless Monitor report highlighting the number of rough sleepers up 15% from 20163, it can only be hoped that with the new legislation, we will see a decrease in the level of those sleeping on the streets in the 2019 report.

However, the report also stresses that there is also no clear statistic as to the number of rough sleepers across the UK, and a senior manager at a homelessness service provider believes that “other cities have to do better” when compared to London in gathering data on how many rough sleepers there are, and that online surveys given to local authorities left over 50% of staff stating that they didn’t believe their figures to be reliable4.

There is a struggle for the single and homeless category of people in that they have difficulty in satisfying the requirements of priority need, and the report indicated that the rate of homelessness acceptances has been low when comparing the growth in acceptance of couples and families found to have been successful with their homelessness applications. 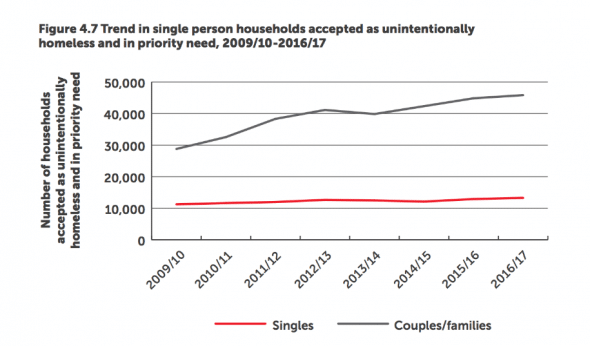 The new legislation provides that Local authorities must assess an individual’s housing and support needs, and investigate the reason why they became homeless in the first place. Local authorities will work alongside homeless individuals and provide them with a personal housing plan to end or mitigate their situation5. Consequently, this may provide more hope for single homeless people as their cases will be looked into holistically, with mental and social factors being taken into account as well as the traditional enquiries of whether they are a “priority” for re-housing.

The involvement of the media over the past year has also been identified in the report, and it is highlighted that the blame for the cause of homelessness is finally being shifted and defined as “collateral damage in the course of welfare reform and retrenchment”6.

With the Royal Wedding just around the corner, the Windsor Homeless Project is supporting the homeless population within their borough by raising money by selling Harry and Meghan memorabilia. With tourists gathering on the streets of Windsor on this day which will attract a large amount of both national and international attention, it is envisaged that there may be a substantial amount of money raised for the cause.

The future of homelessness

We must bear in mind that the Homeless Monitor has been published just after the new legislation has come into force, and we can only wait and see what the future holds with regard to the practical implementation of the provisions over the next 12 months.

Brady Tagg, a legal clerk in the Social Housing team, is the co-author of this blog.

Our Social Housing Solicitors are backed by four decades of experience. Our legal practice and team of London Solicitors have a strong track record of achieving favourable client outcomes. For expert legal advice use our contact form or call us on 0808 231 6369 today.