The importance of a signature

A signature is defined in the Cambridge Dictionary as:

“your name written by yourself, always in the same way, usually to show that something has been written or agreed by you”

Some documents will require your signature in the presence of a witness for it to be legally binding, such as a Will or a Deed to transfer a property. That witness should usually be an adult who is unrelated to you or is not party themselves to the matter (such as beneficiary under the Will).

Some documents will require you to sign to confirm you have declared or sworn in the presence of a solicitor (such as a statutory declaration or affidavit) to be legally binding.

Some documents will require registration with an authority to be legally binding (such as a lasting power of attorney). 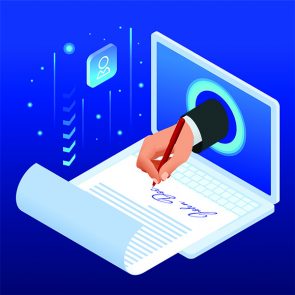 In this day and age though, the use of a ‘wet’ signature (ink on paper) is becoming increasingly diminished with the rise of digital means of verifying documents.

We ourselves use DocuSign which allows our clients to electronically sign documents such as client care letters – this is much more efficient and in line the firm’s drive towards paper lite working.

The Electronic Signature Regulations 2002 implemented the EU Directive 1999/93/EC on electronic signatures and was made under the Electronic Communications Act 2000.

This was then replaced with the EU Regulation 910/2014 on electronic identification and trust services for electronic transactions in the internal market (“eIDAS”) which came into force in the UK on 1 July 2016. This provides that an electronic signature “shall not be denied legal effect and admissibility in legal proceeding soley on the ground that is it an electronic form or that it does not meet the requirements for qualified signature”.

Further guidance has been produced by the government here.

The Law Society have themselves also produced a practice note on the execution of a document using electronic signatures.

More recently on 4 September 2019 the Law Commission published findings on their project for the use of electronic signatures in England and Wales.

The Law Commission concluded that:

This is big area of contention as can be seen by the raft of cases where a signature is litigated over.

Fraudulent signatures, mistaken signatures on mirror Wills, and more recently we had the interesting case of Necocleous v Rees (2019).

This concerned a settlement of a property dispute which was contained in a series of e-mails between the parties’ solicitors. As is the normal, the e-mails were signed off with an automated signature for the solicitor at the footer of the e-mail (in this case – Mr David Tear, Partner, AWB Charlesowrth). The issue was whether the automated electronic footer could constitute a signature as was required for a contract (of compromise) for the transfer of land under section 2(3) of the Law of Property (Miscellaneous Provisions) Act 1989 .

The court held that it did – given the intention of the parties when they were e-mailing each other and the fact that the solicitor had inserted the words ‘many thanks’ which evidenced his intention to link the contents of his e-mail to the automated footer. The relevant question was, had the name been applied for the purpose of ‘authenticating intent’?

Lawyers bearing this case in mind should be more careful of what is said in open e-mail correspondence where their signatures are auto generated.

Whilst electronic signatures on most legal documents have been endorsed by the Law Commission, it remains much more difficult to apply this to deeds which still require the physical witnesses of (physical or electronic) signatures by the witnesses.
The Law Commission saw no issue though with the possibility that a witness could observe an electronic signature by video link, and then electronically signing the document themselves to confirm the witnessing.

I can see practical difficulties with this which will make lawyers rather nervous about getting in wrong.

In respect of documents pertaining to land, at the moment the only deed that can and has been digitally signed and registered are e-mortgages. But the Land Registry is keen to push its digital revolution for conveyancing and registration to improve efficiencies and reduce fraud/mistakes.

The Law Commission have also made recommendations in their report including asking whether the time is ripe for the Government to consider codifying the law on electronic signatures to improve the accessibility of the law.