A homeowner has been granted permission by the High Court to bring legal proceedings against HS2 Ltd for its ‘Three Tunnels’ design into Euston station, claiming that it will endanger the lives and properties of residents nearby.

Mrs Justice Lang DBE yesterday gave Ms Hero Granger-Taylor permission to proceed with the Judicial Review claim she has been fighting for since June 2019.

HS2 Ltd have been ordered to furnish within 21 days the evidence in response to the claim, which in the seven months since proceedings began they have failed to provide.

The judge considered Ms Granger-Taylor’s claim to be arguable on the grounds that HS2 Ltd’s Three Tunnels Design impacts on her rights under Article 8 (right to respect for one’s family life and home) and Article 1 and Protocol 1 (right to peaceful enjoyment of their possessions). 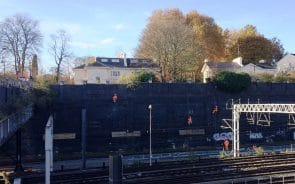 An expert report conducted by the specialist railway engineer Colin Elliff has revealed the Design could cause a huge 10-metre high, 120-year-old wall to collapse into the new tunnels below or onto the existing West Coast main line, potentially crushing railway passengers. Evidence shows the unstable retaining wall causing 130 tonnes per metre of pressure downwards onto the proposed 9m wide tunnel just 1.5m below.

The report supports the notion that HS2 Ltd’s Three Tunnels Design is a hugely dangerous proposal which causes risk to life. At the same time, any collapse could cause serious damage to the houses in Park Village East. The properties affected are Grade 2*Listed Buildings which form part of the John Nash design plans for Regent’s Park.

“Understandably, we and Ms Granger-Taylor are delighted with the result of the hearing. The judge recognises our claim that the Three Tunnels Design is a potentially lethal proposal and of great concern to the local residents. This latest outcome may result in HS2 Ltd taking the view that the Three Tunnels Design is unworkable and therefore being forced to reconsider the entire scheme.”

Ms Granger-Taylor, who lives half a mile from Euston Station, said:

“People in the Euston area have now suffered for ten years the huge uncertainty which the HS2 Ltd scheme has brought with it. It is a real relief to have been vindicated by the law. I am heartened that this decision will have thrown a small spanner into the works of the behemoth which is HS2 Ltd. The lives and properties of those near to Euston cannot just be ignored and we demand proof of basic safety measures so that no lives are at risk.”

The return hearing will take place in May 2020.

Counsel for Ms Granger-Taylor is Christopher Jacobs at Landmark Chambers.

Ms Granger-Taylor is attempting to fund the judicial review challenge through Crowd Justice. Donations can be made at https://www.crowdjustice.com/case/hs2accountability/