A former Ford car plant worker is appealing for his old workmates to come forward after he was diagnosed with asbestos-related cancer.

Stephen Goodwright, 66, worked in the foundry at the huge car plant in Dagenham, Essex, between 1974 and 1985 – where asbestos was used for insulation – and believes he was exposed to the deadly dust while he was employed there.

He now needs his former workmates to get in touch to help him with a legal case against the car giant. 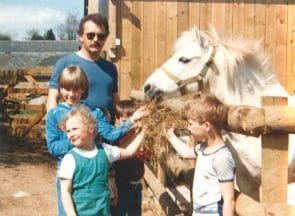 Stephen was diagnosed with mesothelioma – a deadly form of cancer brought on by breathing in microscopic asbestos particles – in March this year.

The father-of-two, who also has two step children, recalls how there was always dust in the air at the foundry where he worked.

Stephen, from Walderslade, in Kent, said: “There was dust all over the place and in the air. We never knew what it was and weren’t provided with any masks or anything like that.

“I started feeling breathless in February and was told that I had mesothelioma in March. I knew something was up but I didn’t expect this.

“I’m just trying to keep myself up beat really as what will be will be. There’s no real point in worrying about I as it won’t do me any good.”

Stephen was employed in the core shop at the foundry which produced the mouldings to make engine parts.

Stephen needs other former Ford workers to contact his legal team to support his case about being exposed to asbestos.

He said: “I’m appealing for others to come forward who worked in the foundry to help me with me case. I am just trying to secure a settlement for being exposed to asbestos, which could ultimately end my life, so that I can help support my family.”

Isobel Lovett, Partner and Head of Industrial Disease at Hodge Jones & Allen, said: “Mr Goodwright worked in a dusty environment at the Ford plant where it is well known that asbestos was used as insulation. We believe he was exposed to asbestos there and we are now appealing to all of Mr Goodwright’s former colleagues who he worked with to come forward and help with our investigation.

Anybody with information should contact Isobell Lovett on 0207 8748502 or email ilovett@hja.net.

Fill out this short form and one of the Industrial Disease team will get back to you.