The family of a pensioner who died after slipping on a ‘bag for life’ in Poundland are taking legal action against the High Street giant. 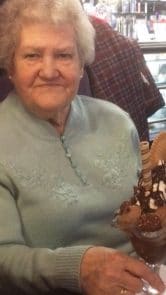 Grandmother of 13 Mary Martin, 83, fell face first after slipping on the plastic bag and died suddenly 12 hours later at her daughter’s home.

CCTV footage from September 15 this year showed the moment when Mary slipped on the carrier bag on that ultimately killed her.

Julie Dines, the daughter of Mary who was with her mother when she fell, said the store has ‘blood on its hands’ following the tragedy.

She said: “When you go out for a spot of shopping you don’t expect to have an accident that costs you your life, but that’s what happened to mum.

“If she had been ill or had been knocked down by a car it would almost be easier to deal with, but to slip over on a plastic bag and die 12 hours later is just incomprehensible.

“I believe Poundland have got blood on their hands. I want justice for my mother’s life and I want them to take some responsibility for her death. If they don’t take those bags away from the ends of the tills then somebody else could lose their lives.”

Mary, from Upper Halling, Kent, was with daughter Julie, 57, and son in law Dave, 54, at the Sheerness branch of Poundland when the incident happened.

Dave, who works as a labourer, said: “Mum had just bumped into an old friend of hers who she hadn’t seen for years and they were talking about how they would see each other soon. We then went into Poundland and mum got some jumpers. We were at the till and I was in front of her. The next thing I knew she was flying towards me and she hit her head hard on the floor.

“I went straight over to make sure she wasn’t unconscious and put her in the recovery position. She had blood over the top of her eye and was conscious the whole time. A district nurse was in the shop and took her blood pressure and she seemed to be fine.”

An ambulance was called, but they were told that it would take two hours to get to her. Dave and Julie took Mary to Minster Hospital where she was checked over before taking her home.

That evening the family went out to a new Chinese restaurant in Sheerness and returned home at 9pm.

Julie said: “Mum was getting ready for bed when she said she felt sick and the next thing I knew she was being violently ill. I kept screaming ‘mum, mum’ but there was no response from her at all. She was just sat on the bed and it was like she had gone.”

Five ambulances turned up to their home within minutes of the call.

Julie added: “I can’t get what happened out of my head. I get upset all the time and can’t help thinking that if it wasn’t for that plastic bag my mum would still be here.

“We are seriously considering moving out of our home as we can still see mum being ill and being taken out of here by the paramedics. We just can’t live here anymore.”

Dave added: “Poundland shouldn’t get away with this. That plastic bag which caused mum’s death was on the floor when she slipped on it. It was an accident waiting to happen and mum was the victim.

“Somebody should have picked up that bag rather than just leaving it there to kill her. I went in there and after speaking to them they took the bags away from the ends of the tills. But a week later and they were back. What upset me most was that in their report they referred to the bag that killed was a ‘bag for life’. That really hurt. This wasn’t a bag for life, it was a bag that took a life.”

The family have launched legal action against Poundland for personal injury.

Karen Mann, a specialist personal injury solicitor from Hodge Jones & Allen, which represents the family, said: “Mary Martin’s family have been left devastated by losing their loving and kind mother and grandmother in such a horrendous way. What is most tragic in this case is that her death was totally avoidable. If the carrier bag had not been left on the floor then she would not have slipped over and lost her life.”