A man with Downs Syndrome who died after he was deprived food for 19 days was neglected by hospital staff, an inquest has ruled. 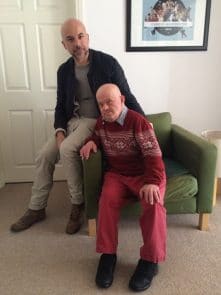 Giuseppe ‘Joe’ Ulleri fractured his pelvis, wrist and neck at his care home and was taken to Manchester Royal Infirmary. But medics failed to spot the injuries until he was brought back the following day because he could not swallow properly.

His difficulty swallowing continued for several days, leading to staff deciding to make him nil by mouth and put him on a naso-gastric feeding tube to prevent him choking. But he found the tube uncomfortable and it was removed a day later.

The inquest heard poor communication between medical staff and delays over deciding how best to feed him left him without nutrition for 19 days, causing him to ‘waste away’ before he died on March 20, 2016.

A jury at Manchester Coroner’s Court found that he Joe had been neglected by hospital staff.

Following Joe’s family released this statement: “We want to start by thanking the coroner, the jury and our incredible legal team who have worked tirelessly over the last three years to get to the truth of what happened to our brother Joe. Nina Ali, Priya Singh, Ayesha Khan. you have restored my faith in the judicial system and we will forever be in your debt.

“Our barrister – Simon Cridland who we will be eternally grateful for my brother Joe needed a voice and Simon gave him such a powerful incisive voice that will have a lasting impact for years to come.

“Our brother was the kindest and gentlest soul, yet he was allowed to die in the most horrendous way. Not only was he thoroughly neglected, he was starved for 19 days in hospital and denied proper pain management. Joe’s death came as a result of what the jury have found to be gross failures from the Manchester Royal Infirmary who were supposed to be caring for him.

“When he had a fall in his care home, breaking his hip, we were told to not worry as ‘people don’t die from broken bones’. The simple truth is he should not have died in hospital. We believe Joe died, like many people with learning disabilities, because of discrimination and indifference by medical staff. When Giovanni asked a nurse about his care he was told that she ‘had 20 normal patients to deal with’.

“We, and Joe’s friends and carers from L’Arche were deeply concerned that Joe was being forgotten about, a belief that turned out to be true. Joe was particularly vulnerable because he couldn’t talk for himself, and we feel so angry that those who were trying to advocate for him, were ignored. We, Joe’s family, only found out that he had been denied food following an internal inquiry. We would never have known otherwise.

Nina Ali, a Partner from Hodge Jones & Allen, who represents the family, said: “This is one of the most disturbing and tragic cases, I have ever dealt with. Joe was a healthy man. Joe’s broken bones were not life threatening, and at post mortem were found to have healed. It was expected he would have recovered and gone home. The way in which he was neglected, left to deteriorate, provide with inadequate pain relief and not given any nutrition for 19 days is indefensible.

“Time and time again we see cases where people with learning disabilities suffer and die because they are treated with indifference and an inexcusable lack of understanding by medical professionals. It is unacceptable that anybody should suffer discrimination and neglect at the hands of the NHS, especially those who are most vulnerable. It is crucial that changes are brought across the NHS to ensure cases like Joe’s never happen again.”