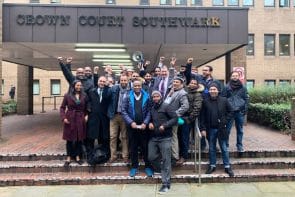 Judge Bartle QC in the Southwark Crown Court has this morning ruled that James Farrar has no case to answer.

In a successful application to dismiss the case, Icah Peart QC argued that Mr. Farrar could not and did not apply force and so, there was no battery and no offence was committed.

The charges relate to a demonstration against Transport for London and the Mayor of London staged by the union on March 4th, 2019 in Parliament Square. During the lawful protest, Mr. Farrar was using a megaphone near the police to address the crowd. Later he was prosecuted for assault, despite acknowledgement from police that no physical action had been undertaken by Mr Farrar. The police charges relate to allegations of assault of two police officer by sound from the megaphone.

The union is deeply concerned that police allegations came after the union had lodged official complaints with the Metropolitan Police Road and Transport Command (MPSRTP) over police behaviour at the demonstration. Farrar complained about police violence against protesters and terrorist profiling of union members. He was released under investigation for 4 ½ months and a charging decision was made within 48 hours of him escalating his earlier complaint about police behaviour after police inaction.

The MPSRTP is almost entirely funded by and is co located with Transport for London.

Just days before the protest, Farrar and union colleagues met with Transport Commissioner Mike Brown on October 28th to settle their dispute over the Mayor & TfL’s decision to remove the long standing congestion charge exemption from minicab drivers. The union argued the decision was discriminatory to the trade’s 94% BAME workforce and that the charges should be passed to corporate operators like Uber and not a precarious workforce. The union went on to pursue a Judicial Review of the Mayor’s decision on the grounds of discrimination.

“This was a corrupt and crude attempt by the Metropolitan Police and Transport for London to break our union and further disenfranchise precarious workers. I now call on the Mayor of London to conduct an urgent investigation into this case and to ensure those responsible are held to account. I have now instructed my lawyers to pursue this matter.”

“We believe this case came about because of deeply rooted corruption and institutional racism within the Metropolitan Police and Transport for London. It was an attack not only on James Farrar, but on the fundamental rights of 110,000 minicab drivers licensed by Transport for London.”

“This was a disgraceful prosecution of a trade union activist for using a loud hailer. In all my years as a criminal lawyer, I have never experienced an argument that soundwaves constitute assault – we’re amazed that it ever got this far. We have maintained from the start that the investigation into Mr Farrar on these spurious allegations began after he made a complaint against the police behaviour that day. We are concerned that there is a risk that this prosecution was a smoke screen to divert attention away from how the Metropolitan Police and TFL are treating Mr Farrar’s union members – we are advising Mr. Farrar about action to take against the Metropolitan Police.”

Mr Farrar and The United Private Hire Drivers’ branch have launched a crowdfunding campaign, to support them please follow this link: https://www.crowdjustice.com/case/defend-trade-unionists/