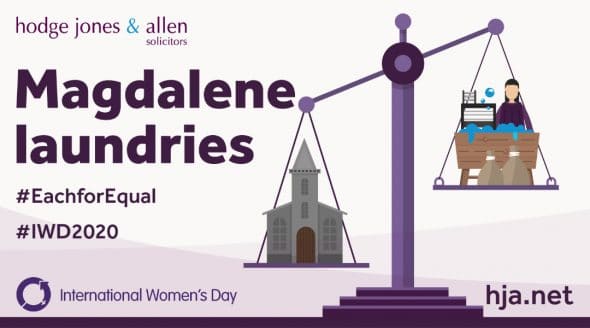 The Magdalen Laundries were Catholic-run institutions where ‘fallen’ women in Ireland were placed and forced to carry out unpaid labour under very harsh conditions.

It is estimated that over 10,000 females were the victims of these laundries, but the figure could be much higher given the unreliability and unavailability of the records.

The Justice for Magdalenes Group was established in 2003 to obtain an apology from the Irish state for their involvement and establish a scheme of compensation for the women.

Their unwavering efforts lead to the McAleese Report and a state apology in February 2013.

Judge Quirke produced a report in June 2013 and recommendations of a restorative justice scheme which was adopted in full by the Irish Government shortly thereafter.

The scheme was set up to pay compensation to women who had been admitted to and worked in a Magdalen Laundry, based solely on the length of their stay, ranging from €11,500 (for 3 months or less) up to €100,000 (for 10 years or more).

This was a non-fault based schemed and no evidence save that required to confirm admission and length of stay was required. The applicant was required to sign a legal waiver of claims but funding was provided for them to seek independent legal advice to do so, as well advice on setting up a trust for their compensation monies (if required).

Hodge Jones & Allen Solicitors was instructed by a number of former Magdalene laundry workers between 2002 and 2006 to help them obtain compensation for their detention in laundries against their will and their treatment including the fact that they were not paid for their work. We lodged claims on their behalf to the Residential Institutions Redress Board scheme which was set up in 2002 but they were rejected on the grounds that Laundries did not come within the scheme.

Over the period from 2004 to 2008 we sought ways to bring a test case in the Irish courts to establish the claims of laundry workers. We obtained advice from counsel in Dublin and London. Letters of claim were sent to the Irish government in 2006 and 2007. We formally requested the government to extend the Redress Board scheme to cover the laundry workers but to no avail.

In September 2011 we were asked to advise JFMG on their paper and prepare submissions on damages to be awarded by the scheme.

In 2014 we were also involved in making representations to the UK Minister of Pensions about the treatment of the compensation under the Scheme for UK based applicants.

There were serious concerns about how the Scheme was being administered and that justice was not being done for many survivors of the Magdalen Laundries. One of these women was Mary Cavner.

Mary is nearly 80 years old. She was made a ward of the court following her father’s death and placed in the Good Shepherd Convent in Sunday’s Wells, County Court, when she was only 11 years old.

Over the next five years Mary rose early every morning to look after the babies of ‘fallen women’, she would clean the refectory and other areas as well as working in the laundries mending sheets, washing and folding linen. In the evenings, she would serve the nuns their dinner, before her day ended at 10pm.

Mary suffered from hunger and malnourishment and received no education from the time she arrived at the convent until she left at aged 18.

When Mary was 16 her sister, who by this time was married and had a family and home of her own, tried desperately to get her out of the laundry, but was prevented from doing so by the nuns, and she remained there for another eighteen months.

After she was finally released, she was too ashamed and perhaps too traumatised from the experience to tell her own family, including her husband and children, until after she found out about the Scheme in 2013.

Her initial application was in fact rejected as the records placed her at St Finbarr’s Industrial School. She contacted the Irish Ombudsman in 2016 seeking redress. We became involved on a pro bono basis in 2017.

The investigation found that the administration of the scheme had been too narrow, and that due to the complex way in which the laundries had operated, many differently named institutions were actually part of one of the 12 named institutions, including the Good Shepherd Convent (which had close links to St Finbarr’s Industrial School). This meant that a large number of women who had applied for the scheme and been turned away, were in fact eligible.

“It was supposed to contribute to healing and reconciliation, but unfortunately for some women these failings in how the Scheme was administered served to reinforce their feelings of marginalisation and deep hurt, and to undermine the restorative effect of the emotional apology delivered by Taoiseach Enda Kenny in February 2013 when the McAleese Report was published.”

Following the findings, Mary made further submissions under the extended Scheme. We continued to have issues with the Irish Government disputing the client’s version of events where this contradicted records held by them. There appeared to be a complete disregard of Mary’s evidence, with an overwhelming reliance on ‘official’ documents which failed to give her the benefit of the doubt as the victim and survivor.

Eventually in May 2019, Mary finally received the justice she had fought so hard and an award was made by the Irish government in recognition of her suffering at a Magdalen Laundry.

She has spent nearly as long fighting the Irish government for justice as she has spent suffering injustice in the laundry.

It saddens me to think that other women in the same situation without support and the means to fight, may never live to see the day that they get what is due to them.