Even before the beginning of the popular film franchise from the 1980s, Friday the 13th has been embedded in our cultural consciousness as an unlucky date. Many people will consider it as a day to not take any risks; by choosing not to drive, for example.

Why is it unlucky? 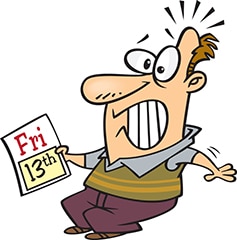 Fear of Friday the 13th, or Paraskevidekatriaphobia for those partial to a bit of Ancient Greek, seems to be a relatively recent historical phenomenon. Both Friday and the number 13 have been considered unlucky for their own reasons, but there is actually no recorded evidence of this specific date being significant before the 19th Century!

In western traditions, Fridays appear to have gained their reputation as an unlucky day in the middle ages due to it being the day of the crucifixion in the Christian faith.

The number thirteen, however, has a long history of being considered unlucky, and there are many theories as to the reason for this.

One of these theories argues that it is a result of the prominence of the number twelve in numerology and religion. There are twelve months, twelve Apostles, twelve Tribes of Israel, and so on. The theory goes that twelve is a ‘whole’ number and thirteen exceeds this, signifying disorder.

There are several other theories, many of which are quite interesting and worth a quick google search.

Is there anything in the superstition?

In comparison to other Fridays throughout the year, various studies, such as one published in the British Medical Journal in 1993, describe no conclusive increase in injuries resulting from accidents on Friday the 13th.

This is mirrored by our own experiences at Hodge Jones & Allen Solicitors, where there is no pattern in the cases we receive to justify the superstitions surrounding Friday the 13th. Unfortunately, accidents are just as likely to happen throughout the rest of the year.

It is easy to prescribe an accident or injury as being down to “bad luck” or being “in the wrong place at the wrong time”. However, more often than not, there will be someone at fault. Accidents are often the result of negligence; not just bad luck.

If you have suffered injury or loss as the result of a road traffic accident, an accident at Work, or any other accident, we would suggest instructing a personal injury solicitor or legal advisor as soon as possible.

Even if the accident occurred on Friday the 13th, it is likely to be attributable to more than just ill fate.