Amazon’s smart assistant, Alexa, is witness for the prosecution. 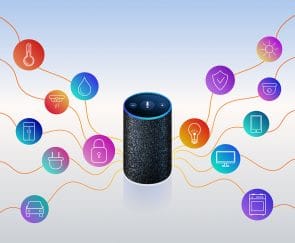 Alexa is a smart technology that advances our quality of life: she [it] is a labour-saving device now routinely purchased, installed and used in our homes.

BUT, she can give evidence against you at court. She’s not your spouse – and so she can be compelled to do so.

Not long after Google’s boss is demanded to answer questions from the US congressional committee for hiding microphones in its Nest devices, Amazon announced that it would be helping Qualcomm to bring Alexa to mesh networks and we should all be concerned.

What happens if Alexa records, unseen, a crime, safely storing all that she hears? The ‘always-on’ electronic home devices are ready-made witnesses for the prosecution.

English law provides for applications to be made by the prosecuting authority – on notice and also ex parte – to act on statutory powers to execute search warrants and compel ‘delivery up’ of sought devices. Where there exist reasonable grounds for belief that items of information bearing upon an investigation into criminality, police routinely do seize computers, mobile telephones and other electronic devices (both handheld and non-portable).

Fresh questions of a different order is the law’s concern with privacy issues to do with devices already in circulation such as Amazon’s ‘Echo’ and Google’s ‘Home’, voice-activated audio and recording units which are constantly “listening” and are responsive to human voice personal commands.

What reasonable expectation of privacy does the law safeguard in respect of a device always switched on in one’s own home?

A relatively recent American case – the abortive prosecution of James Bates for murder – hints at how information recorded on ‘always-on’ devices can be case-turning and even case-winning as evidence capable of being either inculpatory and exculpatory of guilt. The recipient and holder of the information was Seattle-based e-commerce company Amazon.

In 2015, Amazon Echo’s Alexa dipped her toe into forensic waters. Police and prosecutors quickly recognised she had the status of a witness capable of giving material evidence about how a man met his death. Victor Collins, aged 47, had been a police officer in Georgia, USA. Was he murdered by his friend, James Bates?

A search warrant affidavit filed in Benton County Circuit Court, Arkansas, the court of law seised of the case, specified that a third man present on the night of Victor Collins’ death had heard music streamed through Alexa on the night of the death. Amazon Echo’s Alexa, equipped with seven microphones, constantly listens by default for the ‘wake word’ – usually “Alexa!” – after which she [it] records the voice command heard and transfers the sound of that voice to a processor for analysis: requests or questions are then answered.

The recordings are streamed and stored remotely. There was a contest of accounts between police and Amazon as to what is the capability in terms of sensitivity of the Echo technology. Amazon clarified that Echo does not record at all times without the “wake word” being issued; the device is constantly listening but not recording. However, this could soon change after a recent patent by Amazon suggested that the Alexa of the future could listen out for specific words.

The capability of Echo technology obviously makes it a prosecutor’s friend. The real potential and power of Alexa, as a reliable witness and repository of independent and objective fact, is readily apparent.

The ‘always on’ Echo speaker makes recordings of audio it hears from a fraction of a second before it detects a wake word until it deems the command has stopped. Whilst no recordings should be made when there exists no command, Alexa routinely is activated in the event of misinterpreting speech as being its wake command.

The murder suspect or accused person, James Bates, said he had been asleep and had not known anything about Victor Collins being in his bath. Any captured audio may have identified who was active in the early hours of the morning when the alleged murder is thought to have taken place. A recording and transcription of the audio recording created by Alexa is logged and stored in the Amazon application which hosts the programme that is Echo. The log manually can be deleted after created. The technology can be harnessed such that a person who has access to it can later check the application to find out exactly what time a question was asked.

In the instant case, an Alexa-created audio is unlikely to have been conclusive evidence of an alleged murder. Rather, in common with proof of so many types of cases tried in criminal courtrooms, the strength of the evidence is what matters. Evidence tending to support or not to support a proposition is valuable. Investigating and prosecuting authorities in this country and in America, alike, have duties to obtain what evidence may exist which is capable of relevance.

Police tried to obtain any information from the Echo device used at James Bates’ home that Amazon’s servers may have held. Amazon was asked by police and prosecutors to give to the prosecuting authority an audio recording of the data streamed. In February 2017, Amazon refused to do so, saying it sought to protect privacy of users. Lawyers for Amazon filed a motion applying for a judge to dismiss requests for Amazon’s Echo data to be handed over to police. ‘Given the important First Amendment and privacy implications at stake, the warrant should be quashed unless the Court finds that the State has met its heightened burden for compelled production of such materials. Amazon will not release customer information without a valid and binding legal demand properly served on us. Amazon objects to overbroad or otherwise inappropriate demands as a matter of course.’ Weeks earlier, in December 2016, Amazon had given a press statement to The Washington Post to state its opposition to ‘overbroad or otherwise inappropriate demands as a matter of course.’

A surprising turn of events then unfolded. James Bates, the man accused of murdering Victor Collins, ended any further delay or speculation: he said to police he himself would, voluntarily, hand it over to police. Attorneys for James Bates, Kathleen Zellner and Douglas Johnson, told The Washington Post ‘Because Mr. Bates is innocent of all charges in this matter, he has agreed to the release of any recordings on his Amazon Echo device to the prosecution.’

Amazon itself then turned over the recordings later that same day.

The chief executive of Amazon owns The Washington Post.

James Bates was charged with first-degree murder. Victor Collins had been found floating, face-down, in a hot tub at James Bates’ home. After alcohol and football, prosecutors said, came Bates’ attack on Collins. On the night of the death, James Bates had called Bentonville Arkansas police department on 911 to say he had found the body. He said he had fallen asleep after inviting back to his home friends of his from work, including Collins. Whilst his friends had stayed awake to watch football and drink, Bates slept. Shortly after he awoke, he said, he saw Collins’s lifeless body in the hot tub. When James Bates was first put before the court, prosecutors said one of the deceased’s eyes and also his lips appeared to be swollen. Suspected blood spots were found on the rim of the hot tub. The scene appeared to show signs that people had struggled. The Arkansas chief medical examiner said Victor Collins’s death seemed to have been a homicide, not accidental. Police thereby obtained a search warrant for Bates’ home.

Bates pleaded not guilty in April 2017. He was bailed.

In the event, in November 2017, an Arkansas judge acceded to the prosecution’s application to dismiss the murder charge against Bates.

Ever enlarging technological capabilities are such that Alexa surely will be in the dock again before long. Questions need to be asked about the reliability of such evidence as it may be vulnerable to manipulation and distortion.