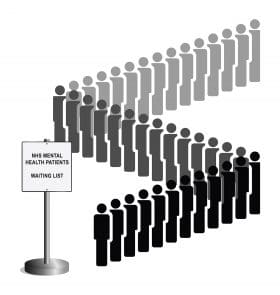 It has recently been published that nearly thousands of patients with mental health problems are left waiting months for treatment on ‘hidden’ NHS waiting lists.

The NHS provides a talking therapy service known as Improving Access to Psychological Therapies (IAPT). The objective of the programme is to provide evidence-based psychological therapies to those who suffer from conditions such as anxiety, depression, obsessive –compulsive disorder and PTSD.

A report by NHS Digital published on 14 November 2019, revealed that 75% of patients who enter the IAPT programme are seen within 6 weeks, which on the face of it seems relatively quick. However, the reality is that patients are left waiting months to enter into regular treatment sessions after their first initial appointment.

However, speaking on BBC Radio 4’s Today programme, Professor David Clark, a founder of the programme commented that, ‘Recently, the waiting time to the second treatment actually hasn’t changed…’ and that the initial assessment has been brought forward, ‘…so the gap appears to be increasing’.

A spokesman for the NHS also stated that the IAPT programme has helped thousands of patients combat their mental health problems ‘…and the widely agreed waiting time targets have not just been consistently met but exceeded.’

It is slightly worrisome, that in the NHS Mental Health Implementation Plan 2019/20 – 2023/24, the new framework to transform mental health care maintains the current standards for an IAPT referral to treatment time, notwithstanding the current prolonged interim waiting period.

What does this mean for patients who require support?

Despite the comments from the NHS, there is evidently a gap between the first initial assessment and the second appointment and the NHS concede that the delays are caused by ‘pressure on the system’.

Figures report that nearly 100,000 patients have dropped out of the service due to the length of time and resorted to private treatment instead. For those who are more vulnerable and in a serious need of IAPT services, there is a real risk that they are being deprived of treatment to help them overcome their conditions which can either lead to abandonment of the service completely or dangerous repercussions such as self-harm and suicide.

Speaking to the BBC, Paul Farmer, the chief executive of the mental charity Mind commented that ‘…being left without support can have life-threatening consequences’ and ‘Whoever forms our next government needs to make sure that everyone with a mental health problem gets the right help and support at the right time.’

With the General Election looming over us next week, it remains to be seen whether the new government does indeed provide a radical overhaul in the provision and delivery of swifter mental health services.