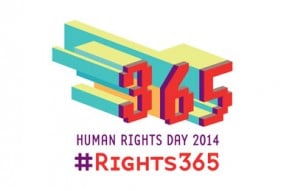 It was as important then, when the memories of World War II were fresh in the minds, as it is today, as we witness events in Syria and North Korea, amongst others. So we wanted to mark this important day as abuses of basic rights continue to occur all around the globe.

It is also important because human rights have had a pretty bad press in recent years here in the UK. The media regularly publish stories about human rights arguments being used in trivial cases, with individuals claiming such-and-such is against their human rights.

At the same time, the media report on claims by suspected terrorists or notorious criminals, who gain little sympathy for their claims because they have committed (or are accused of conspiring to commit) serious criminal offences. Lots of arguments against human rights are linked to questions about the power of the EU, the sovereignty of the UK and the way in which the Human Rights Act 1998 might have been misinterpreted and misused.

So on this important day let’s clear up some myths about human rights.

The fact is that most human rights cases are not about trivial breaches of rights, and the vast majority have nothing to do with terrorists or relate to other heinous crimes. Most cases involve ordinary people who have been mistreated in some way, and who are looking for justice.

We have been a signatory to this treaty since 1950. International treaties agreed between governments don’t have effect in the UK unless an Act of Parliament says they should, and so before the Human Rights Act was introduced, people could go to the Court in Strasbourg to claim their rights had been breached, but they could not claim in English courts.

The Human Rights Act [http://www.legislation.gov.uk/ukpga/1998/42/contents] changed that, and brought the rights in the European Convention on Human Rights into English law.

This leaves Strasbourg as a place of last resort, but usually the Strasbourg Court agrees with the decision of the courts here in the UK. In all the time we have signed up to the Convention, less than 2% of the applications made to the Court have resulted in the UK Government losing. This means that attacking the Human Rights Act and the Strasbourg Court, is also an attack on our own courts and the rule of law in the UK.

Today of all days it is important that we reflect not on the lurid and often ill-informed headlines but on the rationale behind the day. In fact, this year’s theme is Human Rights 365. It celebrates the fundamental proposition in the Universal Declaration that each one of us, everywhere, at all times is entitled to the full range of human rights, that human rights belong equally to each of us and bind us together as a global community with the same ideals and values.

Our Civil Liberties & Human Rights Solicitors are backed by four decades of experience and have a strong track record of achieving favourable client outcomes. For expert legal advice use our contact form or call us on 0808 231 6369 today.