More than a third of suspicious Brits have turned detective on their partner to check they haven’t been cheating by checking their mobile and Facebook.

Snooping social media accounts, looking at a partner’s WhatsApp and text messages on their phone or tablet and getting into their emails were the most popular forms of keeping tabs on their partners, new research has revealed. 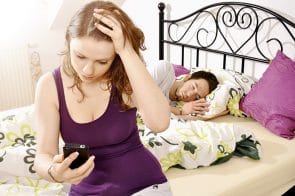 The tech-savvy younger generation are much more likely to snoop, with 56 per cent of 16-24-year-olds and 58 per cent of 25-34-year-olds admitting they had looked at their partner’s devices.

Four in 10 of those who spied on their partner said they would check their phone at least once a week. Shockingly, one in five men who checked their partner’s mobile even admitted to waiting until their partner was asleep to use their finger print to get into their mobile. Two per cent went to the extreme level of hiring a private detective to catch their partner out.

Over half (51 per cent) discovered something that made them think that their partner was cheating, with 45 per cent of those finishing with them as a result of what they found.

But those questioned couldn’t agree on what ‘cheating’ was – with almost six in ten saying sexting was enough, 28 per cent saying flirting, one in seven saying emotionally confiding and one in nine saying kisses on the end of text messages constituted betrayal. Six percent said that liking somebody else’s post on social media showed their partner was being unfaithful.

The survey of 2,000 Brits was carried out by family law specialists Hodge Jones & Allen after solicitors noticed more and more people are citing information found on their partner’s devices as examples of unreasonable behaviour and adultery for divorce.

Jacqueline Major, Head of Family Law at Hodge Jones & Allen, said: “We are seeing more and more people who have turned detective on their partner by looking through their devices and social media. As we live our lives increasingly on mobile devices and social media platforms, they have become a mine of information for suspicious partners.

Nine in 10 said they thought mobile technology and apps had made cheating easier.

Ironically, when the tables were turned one in four said they would consider finishing their relationship if they found out that their partner had checked up on them.

Jacqueline Major added: “Be wary before playing with fire – you never know what you may find and something that may actually be innocuous and innocent can be misconstrued. A false accusation could lead to your relationship falling apart.”