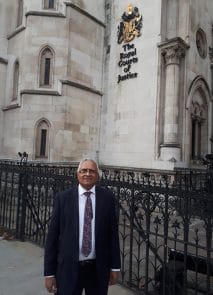 Dr Rajeshkumar (Raj) Mehta, a respected senior NHS General Practitioner in Birmingham, has had his conviction for sexual assault on a patient quashed by the Court of Appeal after new evidence came to light showing the patient to have lied on oath.

Dr Mehta, 65, was originally found guilty by a jury at Birmingham Crown Court in April 2018 for touching a patient’s breast during a walk-in-patient consultation at The Hill Practice in Sparkhill, Birmingham. He was sentenced to 15 months in prison, which he served in full.

Whilst in prison, his family instructed a new legal team who discovered fresh evidence that severely tainted the credibility of his accuser and should have been disclosed to Dr Mehta before his trial. Further evidence was obtained using a firm of investigative consultants.

Responding to the judges’ decision on Friday, Dr Mehta said: “I would like to express my enormous relief that my name has been cleared, after three very difficult years. Over the past year, my wife and children have carried the burden and spearheaded a campaign to clear my name.

“Whilst in prison, I shared cells with others in two prisons, including a category B Birmingham prison, which, when inspected, was found to have frightening levels of drink, drugs and violence amongst inmates, with corridors littered with cockroaches, blood and vomit. After I was released, I endured regular, repetitive and humiliating interviews with trainee probation officers, asking me detailed questions relating to sexual assault matters. My house was visited by police officers. I was put on the sex offenders register. Without my family’s support, I would not have survived.

“The Crown Prosecution Service (CPS) and West Midlands Police have a lot to answer for; in my case, their disclosure failings contributed to a catastrophic outcome, and, whilst I have already served my sentence, I hope that my case will further highlight the need for them to perform their obligations properly.

“I feel very anxious for the medical profession. Doctors work to do their very best for their patients, often in challenging circumstances, and there simply are not adequate protections to safeguard them against the few patients who make false accusations.

“I want to thank all those who have believed in and supported me throughout my long ordeal, not least my family. I am very grateful to my legal team, Nigel Richardson of Hodge Jones & Allen and Eleanor Laws QC of QEB Hollis Whiteman, for their counsel and for robustly fighting to clear my name. They were supported by an investigations team who worked tirelessly to prepare the case file.

“I would also like to thank the Council and senior staff at the Medical Protection Society, as well as Rt Hon Dame Caroline Spelman, Tom Rainsbury of 9 Gough Square, Iftikharuddin Riaz and Mian Muhammad Kashif of Bhandari Naqvi Riaz (a law firm in Pakistan), David Sellu, and former colleagues and patients, for their steadfast support.”

Nigel Richardson, criminal defence partner at London solicitors Hodge Jones & Allen, who represented Dr Mehta said: “The conviction of Dr Mehta was particularly troubling, and it took a great deal of effort to uncover the evidence that undermined the single witness’s account. Dr Mehta’s long and distinguished career was destroyed under the watchful eye of the CPS. This level of incompetence has to be stopped before it completely erodes our justice system and should be a priority for the new government.”

The judgment was handed down in the Court of Appeal by Singh LJ, Spencer J and HHJ Katz QC on Friday 13 December. Case number: 201804812B5. A full written judgment will be made available in the New Year. The complainant has been granted an anonymity order.