Grieving Son Appeals For Help After Dad Died of Mesothelioma

A grieving son has told how he lost his ‘best mate’ when his dad died of asbestos-related cancer.

Now Guy Cheshire is trying to find out how his beloved father, Keith, contracted deadly mesothelioma which ended his life. 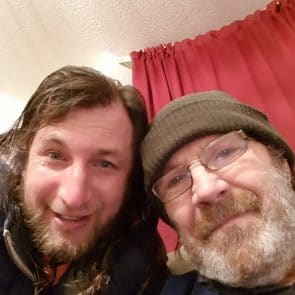 Father-of-four and grandfather-of-13 Keith, 73, from Clacton-on-Sea, Essex, worked for several years in the merchant navy on cruise liners. For a large part of his career he cleaned the ships which contained steam pipes lagged with asbestos.

His family are now looking for former colleagues to come forward and help identify where he may have come into contact with asbestos.

Guy, 37, who also lives in Clacton-on-Sea, said: “My father was the most genuine person you will ever meet and had a hilarious direct and honest sense of humour. He was so hard working and you wouldn’t get anybody else like him. He was very knowledgeable about most things and a real jack of all trades. He was a fine artist and

“I was so upset when he passed away as he was such a great father. If something was ever wrong he would be there for us.

“He was never ill and physically fit until he broke his hip and he never really recovered. His whole family miss him terribly as we all respected him greatly.

But I personally feel like I have lost my best mate, 100 per cent. We did everything together and I miss having him around.”

Keith had a fall in August 2016 and broke his femur. A few months later he started coughing up blood and in October 2017, after a biopsy, he was diagnosed with mesothelioma. He died in June last year.

Keith worked on several P&O Shipping Company cruise liners, starting his merchant navy career on the Sorova from February 1966 to October 1967, sailing out of Tilbury, Essex.

His final job in the merchant navy was on the Windsor Castle, operated by the Castle Line, from November 1971 to January 1972.

Guy added: “What infuriates me the most is that I know he would have worked harder than anybody on those ships, but working in them could have ultimately ended up costing him his life.

“Dad used to clean the ships and remembered big pipes below deck that they were lagged with something he believed was asbestos. At that time they didn’t know that it was dangerous.

“Now we need the help of his former colleagues to come forward so we can find out where he was exposed to asbestos.”

Isobel Lovett, Partner and Head of Industrial Disease at Hodge Jones & Allen, who is representing the family, said: “Keith worked for several years in the merchant navy where he recalled cleaning cruise ships where pipes were lagged with asbestos. Like so many people at that time, he had no idea how dangerous this substance was. We are investigating how Keith contracted mesothelioma and are appealing for his former colleagues to come forward to help us find out where he was exposed to asbestos.”

If anyone recalls working with Keith and can provide any information that may help, please contact Isobel Lovett at Hodge Jones & Allen on 020 7874 8502 or email ilovett@hja.net.