A vulnerable man has told how he was trafficked to Spain and forced into slavery before escaping his captors and fleeing to the UK. 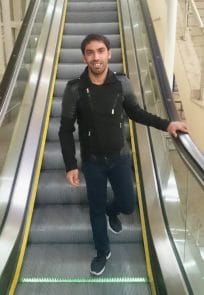 Marian Ion, 35, from Romania but now living in Leeds, was beaten and forced by a family to work for free on their farm and to accompany them on trips to sell counterfeit goods in Bulgaria.

He was then made to go to Tenerife against his will and forced to beg daily on the streets for three months.

His enslavers kept hold of his identification documents but Marian managed to get his ID card back when his captors left the house. He fled to the UK, but he was arrested at the airport for a crime he was forced to commit by the ruthless family.

During his time in Romania his captors had made him sign his name on documentation when selling counterfeit goods in Bulgaria stating that he was the owner of the fake tracksuits. Unbeknown to Marian the authorities there had issued an international arrest warrant for him.

Despite being a vulnerable victim of trafficking and slavery Marian faced being extradited from the UK to Bulgaria. The National Crime Agency also concluded that Marian was a victim of modern slavery.

But extradition specialist Sean Caulfield at Hodge Jones & Allen, instructed counsel Saoirse Townshend, and successfully appealed against an order to extradite him on the grounds that it would be against Marian’s right to a private life under Article 8 of the European Convention of Human Rights. Justice Lewis quashed the order for extradition, taking into consideration the lack of seriousness of the offence and Marian’s vulnerabilities.

Marian lived in Romanian orphanages until he was 21. He was homeless for several months before he started working for a gypsy family in 2013.

Marian said: “I started working for a man called Vasi as I was homeless and desperate in Romania. Vasi knew of my background he knew he could exploit me. Before I started working for him he took my Identity card stating that he did not know who I was and as I was going to be around his family living in his house he needed some form of assurance.

“I didn’t hesitate in giving him my identity card because I was so constrained by my circumstances that I had no other choice. I soon realised that I was living at Vasi’s mercy and had no option but to carry out whatever was asked of me. On one occasion he came in drunk and assaulted me very badly. I couldn’t escape as he had my ID card and I thought he would kill me if I tried to run away.”

Later that year Marian was made to go on a trip with Vasi to Bulgaria when he was was selling counterfeit goods.

He said: “I had no idea what Vasi did for a living but I knew that he bought and sold goods in Bulgaria. I recall that one morning in 2013 his wife asked me to accompany her and Vasi’s nephew in their car to the border of Bulgaria. I was taken into a building where there were boxes of items and Vasi asked me to sign a document which was in Bulgarian. I was wary because I had no idea what I was signing for but Vasi stated that I was merely signing something as a witness. I signed the document because I was scared of him and following this Vasi and the other man who was doing the deal with him began to laugh hysterically and referred to me as ‘boss’.”

The following year Vasi told Marian that he had to accompany him to Tenerife where he had a job for him in construction.

Marian said: “I didn’t want to go as I was in college but he told me I wasn’t going to make any money in college and that I had to come, I was too scared to turn him down. When we arrived at the house everybody had beds apart from me who had to sleep on pieces of cardboard on the floor in the kitchen. I recall that on the night we arrived Vasi’s brother pointed to a placard and stated ‘let’s make him an ID card’. He was pointing to a placard which was then given to me to use to beg. I was very angry and annoyed at the time because I was duped into coming to Spain under the impression that I had a job lined up but instead it became clear that I was recruited to beg for Vasi and his family.”

Marian begged every day for three months and had the money he managed to get taken away from him every day. When Vasi went back to Romania Marian was beaten up by his brother. The next day he was allowed to stay home, found his ID and fled.

After working as a security guard Marian flew to the UK with the help of a woman he had been in touch with online, but he was arrested at the airport.

He said: “I was shocked when I was arrested as I couldn’t understand why. It is clear to me now that Vasi and his family set me up. I have been forced to fight to clear my good name when I was the victim in this, but I am pleased that this was achieved by my legal team.”

Sean Caulfield, partner at Hodge Jones & Allen and Alexandra Pecanac, worked on the case together. They said: “Our client has been taken advantage of for most of his life, being forced into modern day slavery and to work for nothing while being constantly threatened with violence. He fled to the UK to seek a better life but was immediately arrested for a crime he was duped into carrying out. We are pleased the Court of Appeal overturned the European arrest warrant and allowed Mr Ion to restart his life away from those who abused him for so long.”