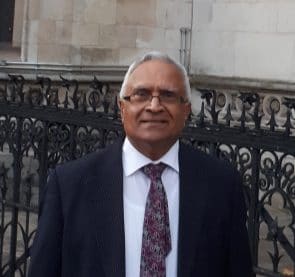 A respected medical practitioner, Dr Rajeshkumar (Raj) Mehta, has now had his name reinstated onto the General Medical Council (GMC) register, having had his conviction for sexual assault on a patient quashed in a landmark case.

Dr Mehta was originally found guilty by a jury at Birmingham Crown Court in April 2018 after a patient had accused him of touching her breast during a walk-in patient consultation at The Hill Practice in Sparkhill, Birmingham.

He was sentenced to 15 months’ imprisonment, which he served in full. He was also erased from the medical register in May 2019, despite the GMC and Medical Practitioners Tribunal Service (MPTS) being asked to adjourn proceedings for a short period, pending the outcome of his appeal against his conviction, which was ultimately heard some months later that year.

Remarkably, while serving his sentence, evidence acquired by Dr Mehta’s new legal team showed that the patient had lied during the proceedings, both on oath and to the authorities, severely tainting her credibility.

Prior to the conviction, Dr Mehta had an unblemished career of almost 40 years’ NHS service as a General Practitioner in Solihull.

“I am delighted that my name has been reinstated onto the medical register, which I had joined back in 1978. After three very hard years, which left my career and reputation severely damaged, I can now look forward to the future. Once again, I want to thank my family and my legal team for their unwavering support.”

“This is what we were working so hard to achieve and we’re elated to see his name restored to the medical register. Dr Mehta’s life had been destroyed on account of false accusations, and clearing his name was the first step in rebuilding his career that he worked so hard to get in the first place.”

“We are pleased that the Medical Practitioners Tribunal Service agreed to promptly restore Dr Mehta to the medical register without the need for a further court hearing.

“Following Dr Mehta’s acquittal, it is right that his record on the register be changed so that it reflects his long and distinguished service to the NHS”.