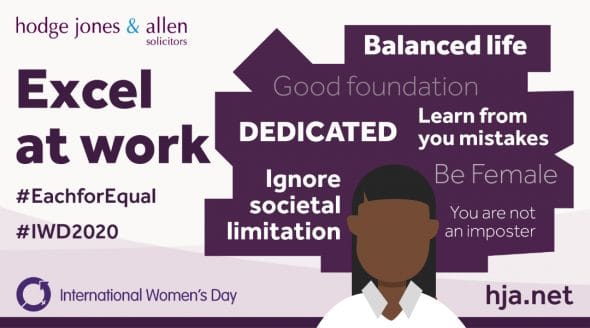 For International Women’s Day I spoke to successful women at Hodge Jones & Allen Solicitors, and more widely in my life, with a view to compiling a series of pointers on how to excel at work. I asked my interviewees what advice they would give to both junior individuals in their fields and their younger selves., and compiled their responses.

Set good foundations for a healthy, balanced life early in your career to achieve sustainable success.

If you spend all your time and energy on work, you set this as the default expectation others will have of you going forwards. If you then decide to start a family, and inevitably cannot spend as much time working, you may struggle to match up to those high expectations. This can leave you feeling like you are always failing either at work or at home. Taking a balanced approach from the outset of your career can render the transition into starting a family less overwhelming. By working efficiently and managing your time well you can achieve professional success without working unreasonably long hours. There is a risk that dedicating too much of yourself to work will result in burnout whereas maintaining a healthy balanced life is more conducive to sustainable success. That said, it can be difficult, arguably impossible, to strike the perfect balance between work and home life all the time. It is ok to prioritise work or family at different points in your life.

Accept that you cannot be in control of everything and delegate both at work and at home.

It can be challenging to relinquish control and delegate, but it is essential to learn these skills in order to manage increasing responsibilities. If you try and do everything yourself something is bound to give way. Even those who are used to the idea of delegating work responsibilities may not be accustomed to thinking of family responsibilities in the same terms. Delegating tasks at home can prove just as vital as delegating at work. Something as simple as dividing chores or responsibility for different aspects of your children’s lives can make it easier to achieve both success at work and happiness at home. It is worth noting that many of my interviewees stressed the importance of flexible working arrangements in managing responsibilities both at work and at home.

Shake off the dated myth that you must take on traditionally male characteristics to achieve success at work.

Men, particularly white men, have a monopoly on success. In light of this, it is unsurprising that some people feel they must act like society’s traditional idea of a man to succeed. One interviewee recollected that she used to avoid using signifiers of her gender in job applications because she thought she would have a greater chance of securing interviews if recruiters thought she was a man. Another interviewee recalled being the only woman in her office and modifying her personality to be more bullish and banter-ous to assimilate into the team. Both interviewees have since determined that, regardless of your gender identity, you do not need to emulate characteristics of society’s traditional view of a successful man to succeed.

This is as true and significant for men as it is for women, particularly in relation to combatting toxic masculinity. ‘Soft skills’ such as active listening and empathy, which are traditionally associated with women, are vital to achieving success at work. One interviewee passionately argued that the Women’s Liberation movement denigrated traditionally female roles and skills, perpetuating the myth that you must act like a man to achieve success. Only when equal respect is given to traditionally male and female roles and skills will the pressure to act like a man in order to be successful dissipate. My interviewees are themselves testament to the fact that you do not need to take on traditionally male characteristics to achieve success at work.

Some of my interviewees recalled early in their careers encountering women who thought success was only achieved by adopting traditionally male characteristics. These women distanced themselves from female colleagues and were often actively unpleasant and unsupportive to them. One of my interviewees characterised this as an old school mentality that was more prevalent a couple of decades ago. It is arguably unfair to judge these women as many of them built their careers in a time when sexism was more overt and extreme. However, by taking on this outdated attitude, women act as agents of their own oppression. For some of my interviewees, bearing the brunt of these toxic and counterproductive attitudes highlighted the importance of female solidarity in the workplace and motivated them to be better role models. I feel grateful that we can learn from more diverse blueprints for success, like those drawn out by the women I interviewed.

Develop a productive relationship with failure.

As pointed out by one of my interviewees, lawyers generally have risk-averse personalities and the legal sector can be unforgiving when it comes to lawyers making mistakes. In light of this, it is understandable that many of us at the start of our legal careers fear failure, however this fear can be paralysing and impede real progress. Mistakes are an important aspect of progress. If you are not making any mistakes, then you are not taking on enough responsibility. Many of my interviewees now view failure in a radically different way, compared to how they did at the start of their careers. I noticed an appreciation for lessons learned when things did not go to plan, and an understanding that knowing why you failed in the past can teach you how to succeed better in future. It can be harder to put failure into perspective at the start of your career, perhaps partly due to impatience to prove yourself and progress. It is important to put things in perspective and develop strategies to productively deal with failure, because real success is ultimately gained through continually getting back up after knockbacks. It is worth noting that fear of failure can depend on how much you have at stake. The consequences of failure for some women, especially women from disadvantaged groups, can be dire. It is more challenging to alter your attitude to failure when you do not have the safety nets that come with privilege.

Try not to internalise the limitations others project onto you.

It is important to acknowledge the multiple intersecting oppressions faced by ethnic minority, working class, the LGBTQ+ community and disabled women. This idea was summed up by an interviewee of South Asian descent who described women in most cultures as second-class citizens and women in her own culture as third-class citizens. It was striking that interviewees from more privileged backgrounds found it more difficult to recall instances of sexism at work. One interviewee recalled her experiences as the only female and only non-white lecturer at a college. All of the lecturers’ names were printed on a wall and her name was added to the bottom of the list in chalk because no one thought she would last in the job. Another interviewee, who grew up on a Welsh Council Estate, recalled informing her careers advisor that she wanted to be a lawyer. Her careers advisor retorted that girls from that council estate did not become lawyers, instead they worked in Tesco. The careers advisor went on to hand her an application form to work on the rotisserie counter at the local Tesco. It was at this point that my interviewee realised no one was in her corner and she would have to fight for her career aspirations alone. Both these interviewees have wildly surpassed the expectations others had of them.

Anger is a valid response to prejudice and discrimination, and for some of my interviewees it has been a powerful driving force to achieve success. Children from marginalised groups are told from an early age that they have to work twice as hard for half as much compared to their privileged counterparts. Growing up feeling that you must prove yourself can be exhausting, however it can be liberating to be underestimated. Interviewees recounted instances of capitalising on being underestimated by remaining quiet and then suddenly surprising everyone with their knowledge and competency. As difficult as it is, try not to internalise the limitations others project onto you.

You are not alone in sometimes feeling like an imposter or fraud at work.

Every woman I spoke to in the course of researching for this blog agreed that at some point in their career they had felt like an imposter or fraud, despite overwhelming evidence that they were qualified for their role. This is symptomatic of Imposter Syndrome, which is defined as “anxiety or self-doubt that results from persistently undervaluing one’s competence and active role in achieving success, while falsely attributing one’s accomplishments to luck or other external forces.” From the conversations I had it appears that Imposter Syndrome gets worse the more senior and successful you become. I noticed a general feeling that women can relate to Imposter Syndrome more so than men. My interviewees reflected that in their experiences women generally tend to be naturally self-critical, whereas men typically project more confidence. If you can relate to Imposter Syndrome it can be a relief to know that you are not alone. I recall speaking to a loved one about Imposter Syndrome and seeing the relief and comfort they gained from learning that there was a name for this and that many others relate. It is very much a shared experience.

While I expected to gather practical advice on how to achieve professional success, I did not anticipate the powerful impact the interviewing process would have on me. Listening to the shared experiences of my interviewees left me with an overwhelming sense of solidarity. It was both reassuring and empowering realising that many of us, including individuals at the top of their fields, face the same struggles. I also realised that, while much of the advice has specific relevance to women, it also has universal resonance for people of all gender identities.