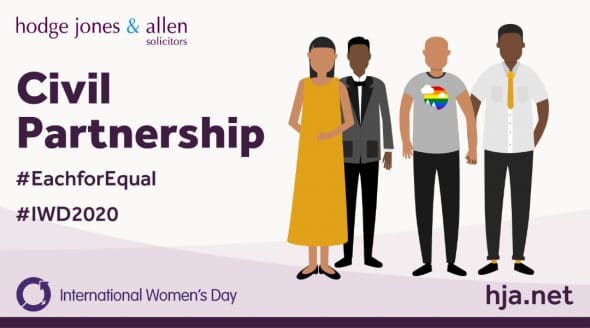 We are all equal in the eyes of the law, apparently. The problem comes when the law does not exist in the first place. If you are an unmarried couple living together you are not protected by any unified legislation, except to cover claims against one another as parents or on death as a dependant. This puts cohabitants at a disadvantage to married couples or those in a civil partnership. The issue particularly affects women, who often take on the burden of childcare at the expense of their career prospects only to find themselves financially unprotected at the end of the relationship.

Family lawyers have been campaigning for years for the introduction of cohabitation laws. In November 2019, Resolution, the largest organisation for family lawyers in England & Wales, wrote to the all of the political leaders asking them to prioritise legislation to protect unmarried couples.

“Unmarried couples make up one in four families in England and Wales – the fastest growing family type. Nearly half the population mistakenly believes in the myth of ‘common-law marriage’. Many cohabitants are surprised to learn they have no rights to property or maintenance for themselves if the relationship comes to an end. This needs to change.”

Case law is full of women who have laboured under the misconception that they have legal rights as a “common law wife” only to discover they have none. Many of the arguments against cohabitation reform say that women do not need particular protection, because they are now equal in the workplace and in parenting. This is true to an extent, but ignores the reality of most families, where women still take on the majority of the childcare, particularly in the early years.

As we wait for the government to address these issues, which may be some time given the demands of post-Brexit negotiations, are there any bright spots? The extension of civil partnerships to mixed-sex couples at the end of 2019 was a positive step. Many of the women who were opposed to marriage will now take the opportunity to become a civil partner, which confers the same legal protection as marriage. Sally Howard was one of the first women to enter a mixed-sex civil partnership on 3rd January 2020. Writing in The Sunday Telegraph, she said that her parents’ painful divorce had made marriage an unappealing prospect. In contrast, a civil partnership is devoid of the “pomp and puffed sleeves” of marriage and yet allows her to be “bound together without any of the fuss”. Most importantly, it provides the legal recognition and protection that she desires.

Women need to make informed decisions about their relationships, as do men. Cohabiting couples must recognise that whilst they feel equal to their married counterparts, the law does not regard them as such.