Disguised or dual-purpose? The Law around stun guns, are they legal and other legal considerations 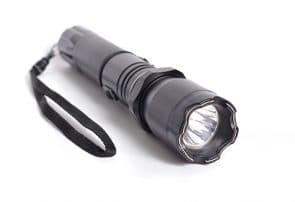 In recent years there has been an increase in seizures of stun guns / tasers which are disguised as torches or mobile phones. Often, these are seized at the border from returning holidaymakers or HGV drivers, but occasionally the police find these items in a person’s home while searching for something else. Many people do not realise that these items are illegal, and most do not realise that they may face a minimum five year prison sentence for possession of one.

Possession of a stun gun is illegal in the UK. They are governed by the Firearms Act 1968.

Is a stun gun a firearm?

The relevant law is as follows:

“(1) A person commits an offence if, without the authority of the Defence Council he has in his possession, or purchases or acquires, or manufactures, sells or transfers-

(b) any weapon of whatever description designed or adapted for the discharge of any noxious liquid, gas or other thing.

(1A)(a) any firearm which is disguised as another object.

A stun gun is classed as a weapon which is designed to discharge a ‘noxious thing’, namely a harmful or incapacitating electric charge. Under the Firearms Act they are always illegal to possess. This applies in both public and private places, including your own home.

This offence carries a sentence of up to ten years in prison. There are no sentencing guidelines, however if the item itself was not particularly dangerous, the offence was not committed in dangerous circumstances, and depending on the defendant’s previous convictions, a prison sentence can usually be avoided with the right mitigation.

Matters are much more serious if the stun gun is ‘disguised’ as something else (usually for example a torch or a phone). The prosecution will then argue that the greater charge under this subsection applies.

This is more serious as a person convicted of possession of a disguised firearm faces a minimum five year prison sentence. It does not matter if the person has no previous convictions and the usual rules for a reduction in sentence for a guilty plea do not apply.

This law was seemingly designed with conventional firearms in mind (pistols etc.) and seems extremely harsh. However the Court of Appeal has previously dismissed appeals made on the basis that this law should not apply to non-lethal stun guns (R v Brereton [2012] EWCA Crim 85).

How to avoid the minimum sentence?

a) Not a disguised weapon

Firstly; it must be considered if the stun gun is disguised at all. Would it stand up to any scrutiny? What shape was it? Were the electrodes prominent? Was there any kind of writing on the side? How it is advertised online? If it can be argued that the item was not ‘disguised’ after all, it should be classified under the “lesser charge” s.5(1)(b) and the minimum sentence should not apply.

In these cases the Prosecution will usually provide a report from a forensic scientist who has examined the item. The scientist will describe the items function, appearance and other supporting evidence such packaging. However; these scientists are often not firearms experts and will make this fact clear in their statement. If the non-expert scientist classifies the item under the greater charge, it is almost always advisable to instruct a properly qualified expert to produce a full report to consider this.

An apparently ‘disguised’ stun gun is often in fact an item designed with multiple functions. For example its primary function may be a torch, and it would be wrong to suggest that the item is a disguised weapon. It can be argued that the greater charge does not apply and the stun gun should be classified under the “lesser charge” s.5(1)(b). These cases need to be very carefully considered as the differences in sentence are massive. Once again, an expert report is highly recommended.

If you or somebody that you know is found to be in possession of a stun gun, it is advisable to contact a solicitor immediately for expert legal advice. You can contact us on 0808 252 5231 or request a call back online.