What is Cerebral Palsy?

Cerebral Palsy is a permanent neurological condition which affects normal movement, muscle tone, balance and co-ordination. In the UK, it is estimated that 1 in 400 children are born with Cerebral Palsy and that there are nearly 300,000 children who have been diagnosed with this condition.

How is Cerebral Palsy caused?

Cerebral Palsy can be caused whilst the baby is still in the womb and the development of the brain may be affected by:

During or shortly after birth, a baby’s brain can be damaged by:

The chances of a baby being born with Cerebral Palsy is increased where:

Cerebral Palsy is a motor related disorder which can cause a multitude of problems. Whilst Cerebral Palsy usually occurs at birth or shortly before birth, Cerebral Palsy can be difficult to diagnose in some cases and where there is a suspicion of Cerebral Palsy after birth, doctors will usually carry out investigations such as an Ultrasound, MRI or CT scan to confirm the diagnosis.

Early signs and symptoms of Cerebral Palsy ordinarily begin to show when the condition begins to impede on a child’s ability to reach certain developmental milestones such as:

Other common symptoms of Cerebral Palsy Include:

However, the degree and severity of symptoms is dependent on the type of Cerebral Palsy a child will have.

Many people with a cerebral palsy diagnosis can grow up and live independent and productive lives, attend mainstream school, have careers and raise families without any assistance. Others will need lifelong care and a good deal of therapeutic input from an early age and for the rest of their lives.

The Gross Motor Function Classification System (GMFCS) is a tool that classifies the problems that children will experience in their lives in terms mobility. There is also a significant correlation between the GMFCS classification and overall mental abilities.

The GMCFCS is often used as a predictor of the lifelong care needs that a child might need.

Cerebral Palsy cannot be cured but it can be managed through various treatment options to mitigate the effect of the condition and enhance an individual’s quality of life.

Certain medicines can be used to minimise the symptoms of Cerebral Palsy including:

Operative management is another option to relieve the symptoms associated with Cerebral Palsy and surgery can be performed to:

Therapies are holistic and play a pivotal role in helping an individual with Cerebral Palsy overcome their difficulties by encouraging independence.

Approximately 1,800 children are diagnosed with Cerebral Palsy every year. With increasing life expectancy this means that there are now an estimated 30,000 children with cerebral palsy in the UK. Of course a diagnosis of cerebral palsy does not mean that the treatment of the mother and/or baby has been negligent. As the table below shows, the number of claims against the NHS relating to Cerebral Palsy has remained at the same level for many years – around 200 new claims are made each year.

Table: A comparison of the number and total value of claims for maternity cerebral palsy/brain damage claims over time across all clinical negligence schemes (Source: NHS Resolution Annual Report 2018/2019) 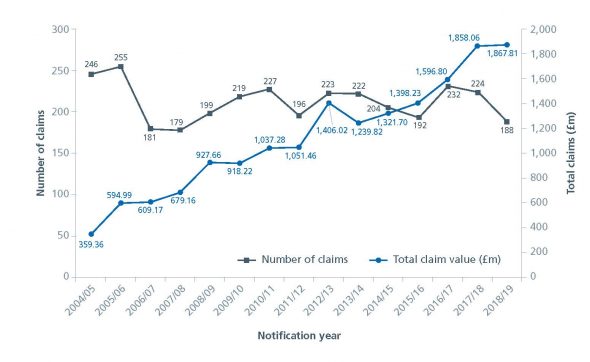 The table also show how the costs of dealing with these claims has increased in recent years, primarily due to better medical treatment overall, improvements in managing percutaneous endoscopic gastrostomy (PEG) feeding, the increasing life expectancy of Claimants and the increasing costs of care. The table below also factors in the change to the discount rate in February 2017.

Where to get further help and support

Cerebral Palsy can be diagnosed at any age. Parents of a young child will find the diagnosis of Cerebral Palsy very distressing and it can be difficult to digest as it will affect the lives of families. There are various online platforms which provide information and advice on Cerebral Palsy including:

How Hodge Jones & Allen Solicitors can help you

Our experts are very experienced in handling high value Cerebral Palsy cases. We understand the difficulties faced by parents in accessing support for their child. We have a long track record of successfully assisting families to resolve their claims and achieving the best possible outcomes for our clients. Our highly skilled team of medical negligence solicitors will advise you comprehensively about the merits of your claim, funding and ensure that you and your family get the best possible results.